Following the recent restrictions on outdoor dining, the list of cities looking to break away from the L.A. County Department of Public Health is growing.
KABC
By Anabel Munoz 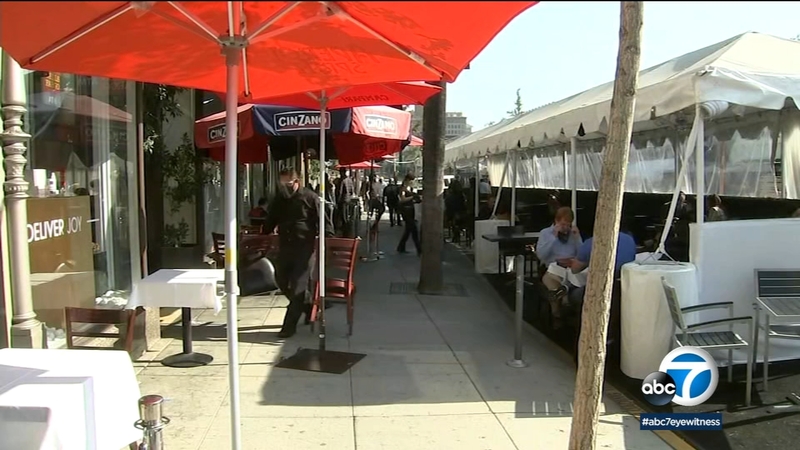 Growing list of cities look to break away from L.A. County health department

LOS ANGELES (KABC) -- Following the recent restrictions on outdoor dining, the list of cities looking to break away from the Los Angeles County Department of Public Health is growing.

"Now, you shut it down again. Tell me how many businesses can survive?" asked West Covina Mayor Tony Wu.

Tuesday night, Beverly Hills took up the matter in its city council meeting. The council asked staff to explore the possibility of creating a local city health department and not remain under the jurisdiction of L.A. County.

"Since this was put on the agenda, we received nearly 900 emails," said Beverly Hills Councilmember Lili Bosse, who introduced the item.

The Beverly Hills City Council also unanimously approved a resolution opposing L.A. County's health order that prohibits outdoor dining, and demands a motion be placed on the agenda of the Board of Supervisors to repeal the ban citing, "a detrimental impact on local businesses and lack of scientific evidence used by the County."

Los Angeles County's ban on outdoor dining apparently will go forward as planned Wednesday, as efforts to block the measure in court and at the Board of Supervisors failed on Tuesday.

Meanwhile, the city of Whittier is also exploring alternatives.

"The county, with this ban has come in and done a one-size-fits-all, rather than a scalpel to take care of the situation," said Whittier Mayor Joe Vinatieri.

Lancaster and Hawaiian Gardens are also looking into starting its own health department.

Pasadena established its health department in 1892. Lisa Dererian, the city's public information officer, said it was more common in the late 19th and early 20th century for cities to run their own health departments.

"In the 1920s, cities throughout the county began to close their health departments, opting instead to collaborate with the county to provide public health services," Derderian said.

Meeting the necessary requirements to run a public health department is a huge undertaking.

Its measures can be less restrictive than the county's but not the state's guidelines. Derderian said their goal is to work in concert with the county. Although, the two - like with outdoor dining - can be at odds.

While some cities want to contract with the city of Pasadena's health department, that's not happening now.

"It's something we can look at and explore, but at this point in time, no, that would not be the case," she said.

If local municipalities decide to break away from the county's health department, it would take time.

"I think it goes beyond just the health pandemic that we're in, and I believe that's something that will be for our children or grandchildren and generations to come. Because number one is health in all aspects of our life," said Bosse.