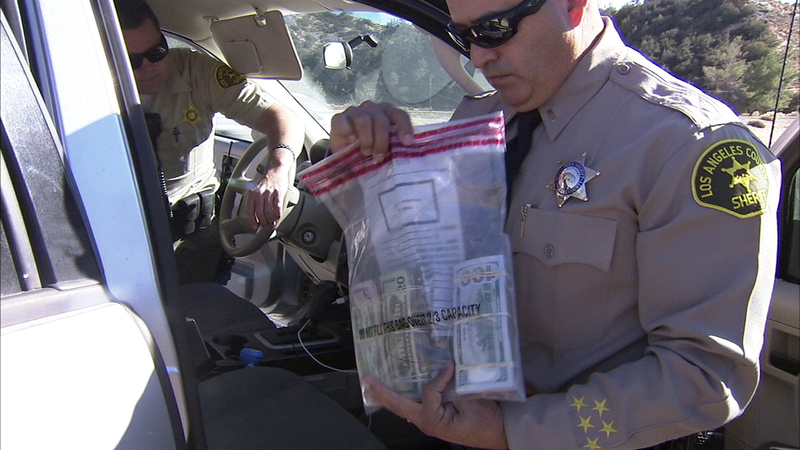 Although the highly skilled unit has been doing remarkable work for years, its existence has only now been made public. In an exclusive report, ABC7 accompanied the Domestic Highway Enforcement Team and observed its methods firsthand.

"The team has been extremely successful, "said sheriff's Capt. Robert Lewis. "They find vehicles that have hidden compartments that are transporting drugs and weapons, U.S. currency."

Their record is incredible. In five years they have quietly confiscated tens of millions of dollars worth of contraband -- and rescued people.

"One of our biggest things that I'm very proud of -- the team was able to, in five cases, come upon individuals, females, that were being human-trafficked," Lewis said.

Rough video shows a minor who was rescued. She was a runaway, forced into prostitution.

"She was being transported to L.A. because the individual felt he could make more money with her," the sheriff's captain said. "Being able to save her and meet her, talk to her mom on the phone, listen to her mom cry -- that was very, very, very impactful."

How does the team do it? ABC7 accompanied Deputy Mike McPheeters in his patrol vehicle on the 5 Freeway through Santa Clarita. The deputy wanted motorists to see him -- then he watched how they reacted.

"You learn behavior," McPheeters said. "You look for key things. And I think that's basically how we learn to do what we do."

With his expert eye, he can distinguish between a regular driver and someone who may have something to hide. He asks suspects simple questions. It's called analytical interviewing; he's done it countless times.

After Deputy Michael Vann pulled a car over on the southbound side of the 5 Freeway, McPheeters drove to the location to join him.

"A lot of things made me believe that there was something going on," Vann said, adding that he discovered a Victoria's Secret bag with an estimated $20,000 in cash inside. "It's actually wrapped in dryer sheets. The reason they do that is to deter our K-9 scent dogs."

The discovery of the cash was relatively easy. Contraband, however, is usually stored in carefully hidden compartments -- "traps" -- in the vehicle. With their special training, the deputies have an uncanny ability to find them.

The investigators showed a reporter examples of such compartments in confiscated cars -- under a floor mat, behind a dashboard stereo, in the trunk, and behind a backseat.

The drug cartels are some of the most ruthless criminals in the world. Yet the Domestic Highway Enforcement Team is unflinchingly smacking them in the face. Yes, it takes skill -- but more importantly, it takes courage.