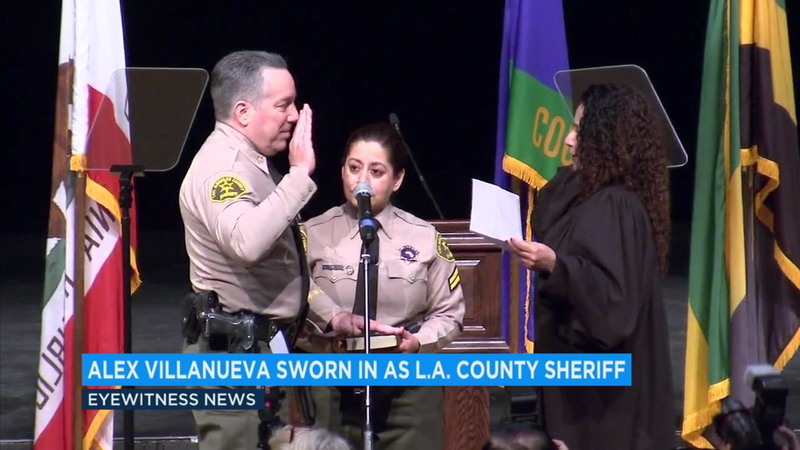 EAST LOS ANGELES (KABC) -- Alex Villanueva was sworn in Monday as sheriff after becoming the first person in more than a century to unseat an incumbent sheriff in Los Angeles County.

"We were the underdogs in a campaign that was discounted by the establishment," Villanueva said. "What we did not have in money or influence we made up with a few brave souls who believed in what this campaign was all about."

Villanueva served for three decades in the department and is retiring as a lieutenant to take office. He defeated Sheriff Jim McDonnell in a rare runoff election.

It appears Sheriff Villanueva plans to keep his campaign promise to remove immigration agents out of the county jails.

"We will not allow any policies outside Los Angeles or California to dictate the way we do our job here in California because our hard working immigrant families shouldn't have to wonder if we are here to protect them or to deport them," he said.

He also vowed to change the culture of the sheriff's department by taking community policing into urban communities.

"Our communities are safer when we recruit locally. When our kids from Compton can grow up to be serving the city of Compton. When our kids from East LA can grow up to serve East LA. We are going to back to being peace officers and be judged by how well we protect our communities because no parent should ever have to mourn the loss of their child."
Report a correction or typo
Related topics:
politicslos angeles countylos angeles county sheriff's departmentelection 2018
Copyright © 2022 KABC Television, LLC. All rights reserved.
TOP STORIES
4 killed, 1 wounded in 'targeted ambush' shooting at Inglewood home
Activists call for reward after teen found dead along South LA freeway
Video shows wild street takeover near Fairfax District
Fraudulent COVID testing sites shut down in South Gate, Bell Gardens
Family demands justice after 23-year-old woman found dead after date
After the omicron wave, what's next for the COVID pandemic?
COVID testing company says it plans to sue Villanueva for defamation
Show More
Rescuers use sausage dangling from drone to lure runaway dog to safety
CPSC issues warning on infant loungers
Famed Big Bear bald eagle Jackie lays first egg of 2022
Russia rejects UK claim of trying to replace Ukraine leader
Pictures show aftermath of crash involving Arnold Schwarzenegger
More TOP STORIES News