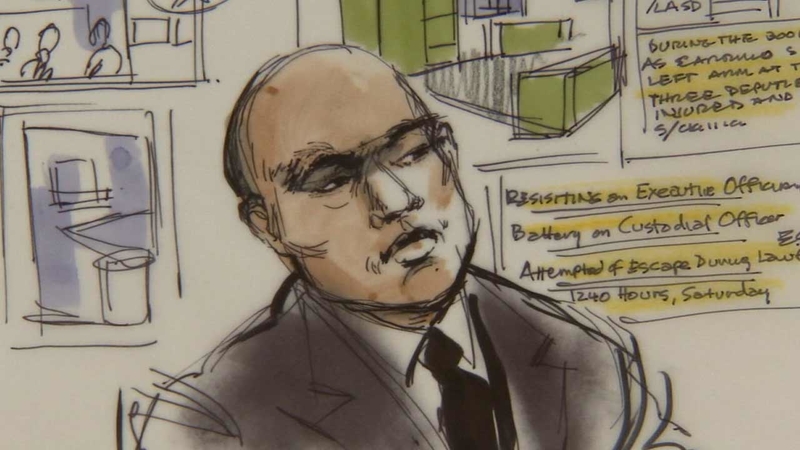 LOS ANGELES (KABC) -- The air filled with blistering pepper spray, a handcuffed jail visitor with his face punched black and blue and a break room floor left bloody by a violent confrontation.

Those are just a few of the scenes described on the witness stand Wednesday by a Los Angeles County sheriff's deputy who "flipped" for the prosecution and is now testifying against his one-time colleagues.

Pantamitr Zunggeemoge says the victim was moaning, sputtering and had "involuntary discharge" dripping down his face after he was blasted with pepper-spray by another deputy.

Sgt. Eric Gonzalez, Deputy Sussie Ayala and Deputy Fernando Luviano are charged with beating the jail visitor, Gabriel Carrillo, and then lying to make it look like Carrillo was the aggressor. All three have pleaded not guilty.

Carrillo and his then-girlfriend went to Men's Central Jail in February 2011 to visit Carrillo's brother. Undisputed is that the couple illegally brought three cell phones into the visitor center lobby. When Carrillo was caught, he mouthed off at Zunggeemoge.

Zunggeemoge handcuffed Carrillo and escorted him into a deputy break room. He testified Carrillo was "angry, agitated and confused," but did not physically resist.

Zunggeemoge says he pushed Carrillo up against a refrigerator and then lifted Carrillo's handcuffed arms up behind his back "so he could feel some pain."

Minutes later, he joined in a "take-down," bringing Carrillo face-first onto the floor.

Prosecutor Lizabeth Rhodes asked the witness: "Did Carrillo use his hands to break the fall? Zunggeemoge answered, "No, because his hands were handcuffed."

Restraints are a key point in this case. Zunggeemoge testified that he and the defendants huddled together after the beating, concocting a story to justify their excessive force. In their version, Carrillo had one hand free, was wildly swinging a jagged handcuff, and wielded it as a deadly weapon.

"It was all part of a story we made up to justify the force we used on Mr. Carrillo," Zunggeemoge told the jury.

He says all four of them made up a story about taking Carrillo's girlfriend out of the break room before the violence erupted "to eliminate her as a potential witness."

When asked by Rhodes why he went along with the story, Zunggeemoge said he feared for his job, feared prosecution and said "there's a bond, you don't go against brothers."

Defense attorneys say Zunggeemoge is falsely testifying now to save his own skin. The deputy pleaded guilty to lesser, misdemeanor charges after entering into a plea agreement with prosecutors. Zunggeemoge says as part of his deal, he will resign from the Los Angeles County Sheriff's Department and never work in law enforcement again.

For a second day, defense attorneys drove home the point that cellphones are illegal at the jail facility and that Carrillo ignored posted signs outside the visitor's center lobby.

Earlier in the day, a juror told the judge that she was so disturbed by the photograph of Carrillo's bloody face, she had not been able to sleep the night before. After questioning from the judge, the juror said she would try to separate her emotions from her intellect to assess the case impartially.

On Tuesday, another juror left the trial before testimony even started after suffering a panic attack. Her departure means the case proceeds with only a single alternate juror.