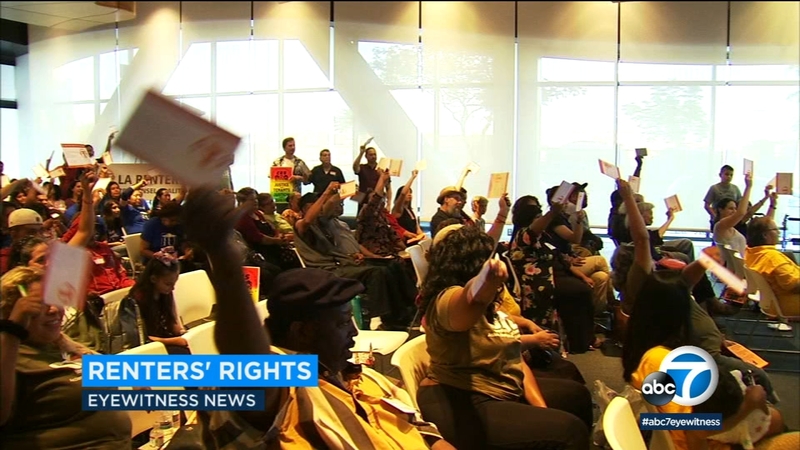 LOS ANGELES (KABC) -- Attendees at a town hall called on the city and county of Los Angeles to join other cities in guaranteeing a lawyer to those facing eviction.

More than a 100 people gathered at L.A. Trade Technical College Wednesday to fight for a right counsel. It's an initiative that would guarantee a lawyer to those facing eviction if they can't afford one themselves.

According to organizers, those represented by an attorney stay in their home more than 70% more often than those who are not.

In attendance were people who say they have always paid their rent, done nothing wrong, but are still facing eviction.

"I got a notice that I had to move because my house was sold in foreclosure," said Khadijah Shabazz of North Hollywood. "So the faces on the street will soon be my face."

The initiative hopes to prevent Angelenos from being the latest victims of rising rents and prevent more homelessness.

"We will be able to not only decrease homelessness, but ensure that Angelenos aren't displaced," said Dianne Prado, Executive Director of HEART LA.

"Every dollar you invest in a right to counsel is going to save multiples of dollars on the back end," said Joe Donlin.

The meeting was about action as well. Attendees called local officials, writing letters and making posters looking to get the word out about right to counsel.

"The limited amount of money that has been spent on eviction defense, we have been able to reduce the number of evictions by about 30,000," Prado said.

Evictions in L.A. County have gone down from about 70,000 per year a decade ago to around 40,000, with limited legal representation.