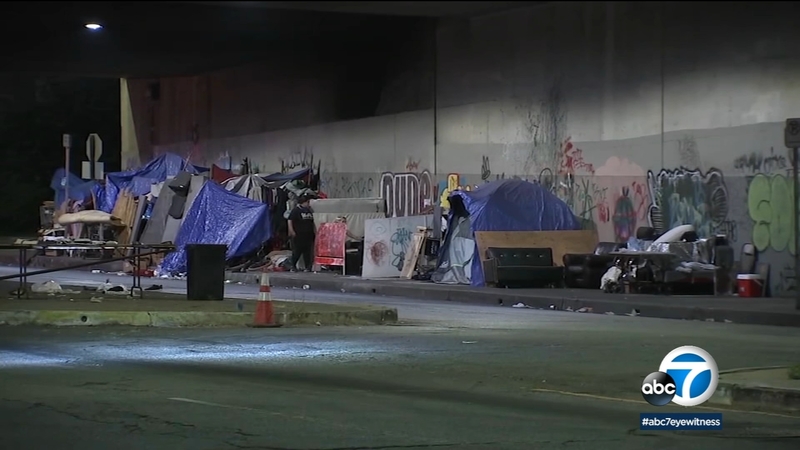 LOS ANGELES (KABC) -- The Los Angeles City Council voted 13-2 Thursday to tentatively approve an ordinance to restrict sleeping and homeless encampments in certain areas of the city, but the ordinance's adoption was delayed because it required unanimous approval upon first consideration.

While some activists and nonprofit groups claim the measure will further criminalize homelessness, the majority of the council agreed they had to take action.

The ordinance, which still needs another vote, would prohibit sitting, sleeping, lying, storing personal property or otherwise obstructing the public right-of-way in several areas of the city including within two feet of any fire hydrant or fire plug, or within five feet of any operational or utilizable entrance or exit, or within 10 feet of a loading dock or driveway, or in a manner that interferes with any activity for which the city has issued a permit, or in a manner that restricts accessible passage as required by the Americans with Disabilities Act, or anywhere within a street, including bike paths.

It would also obstruct the public right-of-way within 500 feet of a "sensitive" facility, including schools, day care facilities, parks and libraries.

People staying in the transitional housing units have access to medical and mental health services.

The ordinance would also restrict blocking the public right-of-way once the Los Angeles City Council passes a resolution to do so, posts signage and gives notice in the following areas:

The ordinance would also allow the city to prevent encampments for a period of no longer than one year in areas that are deemed an ongoing threat to public health or safety, including due to:

"This ordinance will allow us to take some key areas, not all areas...and make them off limits to encampments, but only after we have found housing for all of the people who are in that area," said Councilmember Bob Blumenfield.

Questions remain about enforcement and what the city will do if someone refuses to move, which caused Councilman Mike Bonin and Councilwoman Nithya Raman to vote against the ordinance.

"What is wrong with this ordinance today and why am I voting against it? Because what we're doing today, even as improved, tells people who are unhoused and unsheltered and have no place to go where they cannot sleep, but it does not tell them where they can sleep. That's what it comes down to for me ... where can people go, where can people sleep when they do not have an alternative," Bonin said.

Bonin shared with council members his own experience being unhoused, saying, "some of those nights I slept in the car, some of those nights, when my car was in the shop, I slept on the beach. I cannot tell you how much turmoil is in your heart when the sun is setting and you don't know where to sleep. I cannot tell you how demoralizing and dehumanizing and defeating that experience is when you don't know where you're going to sleep."

He added that the Los Angeles Homeless Services Authority said Thursday that the city only has enough beds to shelter 39% of the city's homeless population.

"We have in this ordinance the compliance part, but we do not have any of the compassion," Raman said before the rest of the council.

The City Council will go on recess until July 27, when they will review the ordinance again and pass it without a unanimous vote required so it would not take effect until later this summer.