LA clears homeless encampment at Toriumi Plaza in Little Tokyo, a welcomed sight for some businesses 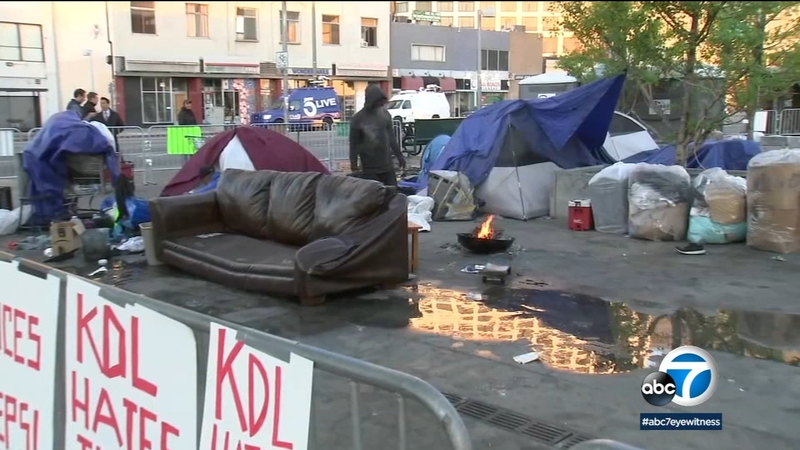 LITTLE TOKYO, LOS ANGELES (KABC) -- Toriumi Plaza in Little Tokyo looks a whole lot different Monday. Overnight Friday, the large homeless encampment there was cleared, cleaned up, and fenced up ahead of a large city maintenance and landscaping job.

It's a sigh of relief for some local businesses who have dealt with property damage, violence and drugs for the last two years.

"It's been long awaited for," business owner Brian Kito said. "The merchants have voiced to me and themselves, and amongst themselves, about, you know, when are we going to get rid of this?"

Like similar efforts, it came with controversy, with activists protesting before it was taken down.

"We really want the community to reflect and realize that these dehumanizing sweeps are not the answer, and that solutions like permanent supportive housing are the real things that are gonna help people," Steven Chun, a homeless advocate of J-Town Action & Solidarity said.

Since last month, the city has brought more than 50 people from the plaza into shelters, others chose to stay, like William Jones.

"I'm not blaming nobody for the condition that we're all in, but what I am blaming people is for the condition we're in if we don't do something about it," Jones said. "So we've gotta have a collective effort to try to help."

He knows it's complicated, but wants it to work for everyone. Jones wants the city to get to the root cause of the homelessness problem, not simply relocate people.

Riverside County is reportedly turning a vacant hotel in Corona into housing for the homeless while the city of Redlands will convert a 99-room motel.

"I think the solution is drugs," Jones said. "You gotta stop the fentanyl from coming up in here. I know you might be mad at me for that, but you gotta stop. And it's killing people."

Right now, there is a temporary fence surrounding the plaza. Eventually, the city plans to build a permanent fence, and this area will only be open during daylight hours.