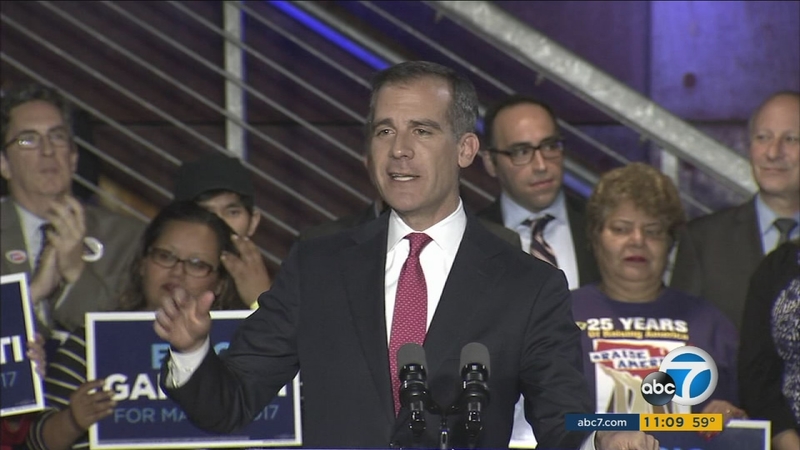 The mayor spoke for only a few seconds before protesters in the crowd started screaming. They were there demanding he declare Los Angeles a sanctuary city before being removed from the event, held at the Laborers' Local 300 Union headquarters in the Pico-Union area of Los Angeles.

After a few seconds, Garcetti acknowledged them.

"We understand and hear you. We are aligned in those values, ma'am," he announced. "We want to make sure that no child is denied the opportunity to go to college. No child should see their parent taken from them while dropping them off at school."

He faced 10 challengers in the mayoral race and he spent more than $3 million to try and get a solid win.

Garcetti has touted accomplishments that have occurred since he won his first term in 2013, including supporting a minimum wage hike, helping the economy by lowering the business tax, encouraging the entertainment industry through tax credits and helping pass a $1.2 billion measure in November to build housing for the homeless.

At the rally, Garcetti also had a message for officials in Washington D.C. "seeking to divide" L.A. residents.

Some of his opponents argued that he has not done enough to combat crime and homelessness. Others fear that he has his sights set on higher public office and would leave his mayoral post to pursue such an ambition in 2018.
Related topics:
los angeleslos angeles countyvotingeric garcettielection dayelectionrally
Copyright © 2021 KABC Television, LLC. All rights reserved.
TOP STORIES
Mom with baby in stroller robbed in driveway of Hancock Park home
Could LA law enforcement agencies lose officers to vaccine mandates?
Whittier family mourns teen son killed by alleged drunk driver
Suspicious item at facility near LAX cleared
Expert on what to possibly expect from the omicron COVID variant
Authorities: Student kills 3, wounds 8 at Michigan school
Lancaster: Father arrested in children's deaths charged with murder
Show More
Man who bought Lamborghini with $1.6M PPP loan gets 9 years in prison
Chris Cuomo suspended from CNN after AG releases documents
Actors honored for rescuing 14-year-old trapped under SUV in NYC
17-year-old from Compton who was missing for a week found safe
San Bernardino father, 6 kids surprised with Christmas toys
More TOP STORIES News