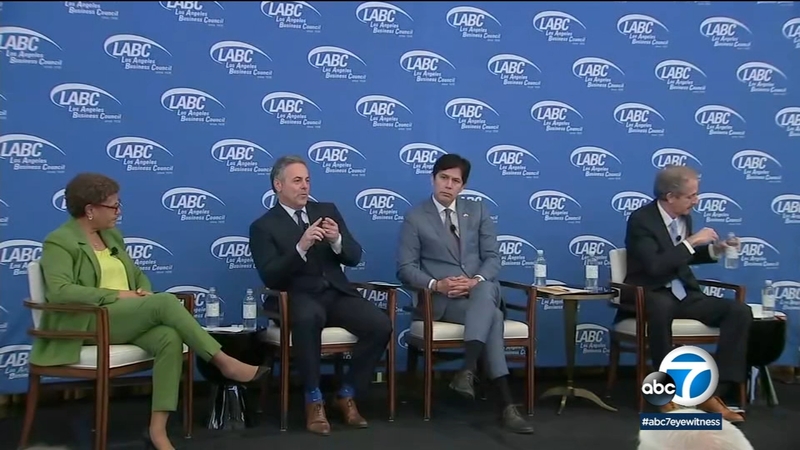 LOS ANGELES (KABC) -- Four Los Angeles mayoral candidates were asked Monday at the L.A. Business Council's forum what they would do to keep businesses from leaving the city. All of them placed an emphasis on public safety.

"I do believe the number one job of the mayor is to keep the city safe, and we're experiencing an uptick in crime, and I think it's absolutely important when a crime occurs we have to hold the individual accountable," said Rep. Karen Bass, one of the leading candidates for mayor. "But I also think we need to invest in communities because we have prevention strategies that have been well researched, well documented."

"L.A. is a filthy place. I have proposed increasing, by a million more hours a year, cleanup and beautification of our neighborhoods. It's also a public safety issue," Feuer said. "In Philadelphia, they did an experiment. They took a dangerous neighborhood. They cut it in half. On one side they cleaned a blighted, vacant property. On the other side, they didn't. A 29% decrease in gun violence in the neighborhood they cleaned up."

Businessman Rick Caruso was not at the forum. He's been attacked for supporting L.A. County District Attorney George Gascón back in the early 2000s when Caruso was chairman of the police commission. On Monday, Caruso released a video where he endorsed the effort to recall Gascón.

"I've also decided to support the recall effort financially to help them get the signatures they need to put this decision on the ballot, so the great people of Los Angeles can make a decision on the direction they want this city to go," Caruso said in the video. "We need to reduce crime. We need to make our city safer and we need to listen to the residents of Los Angeles."

"I hate supporting recalls. But there's zero consequences when people commit crime in our city, and that is getting sent down to the criminal level. You commit a crime, you won't be held accountable," Buscaino said.

"Hopefully my colleagues on this stage join me. In fact, a candidate who's not here this morning is playing follow the leader," Buscaino added.

If elected, not all the candidates would increase the amount of LAPD officers, which currently stands at 9,500 - down 200 from its authorized strength.

"Before we get into a conversation about hiring thousands of police officers or hundreds of more, it's like the price is right. Everyone wants to out-do each other with the number without any scientific evidence behind it," L.A. City Councilmember Kevin de León said at the forum. "We have to get our own house in order, which means we need to better utilize our current resources more efficiently and effectively. We need to hire and we will hire more mental health specialists to deal with the open-air asylum on our streets."

Caruso has yet to make an appearance on stage with the other candidates, and it's unclear when that will happen. The primary is a little over three months away.