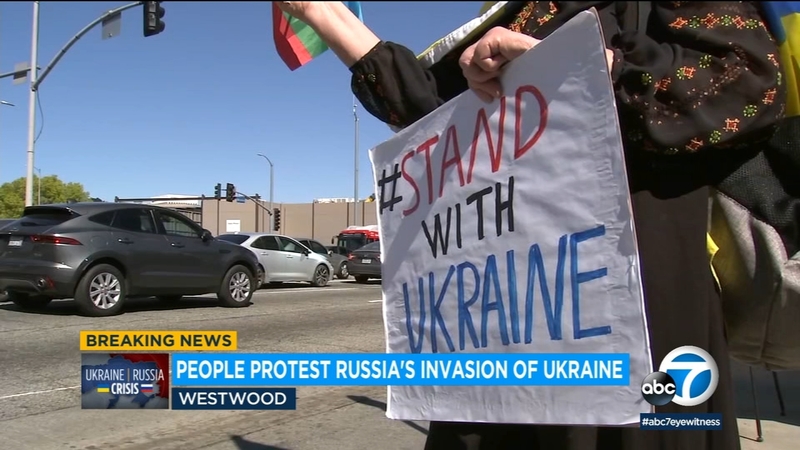 Hundreds gather in LA in support of Ukraine after Russian invasion

LOS ANGELES (KABC) -- Hundreds of people gathered in Westwood Thursday afternoon for a rally in support of Ukraine as Russia launched a full-scale invasion of the country.

Many are feeling helpless, and just want their voice to be heard.

Protesters, including local Ukrainians, rallied together in front of the Los Angeles federal building. Some of them have family back in Ukraine, and are still waiting to hear back from them.

They're asking for stronger sanctions, more U.S. involvement and are stressing that this is not just a Ukraine and Russia issue, but a world issue.

"I cried. I cried. I cried ... If I'm staying home I'm just crying, so I decided to at least do something and to support," said Ukrainian supporter Margaryta Chaliienko.

"The reason why I came here: I woke up at 4 a.m. because my brother called me. He's from Odesa," said Ukrainian protester Ivan Sukhovii. "He called me and he said that Russian troops are coming, 'I'm taking gun, and I'm going to defend my land.'"

While the crowds dwindled later in the day, the spirit was still strong at Thursday's L.A. rally.

There were talks of another local protest happening Thursday night. Eyewitness News was told that demonstrators plan to protest every day for however long it takes.