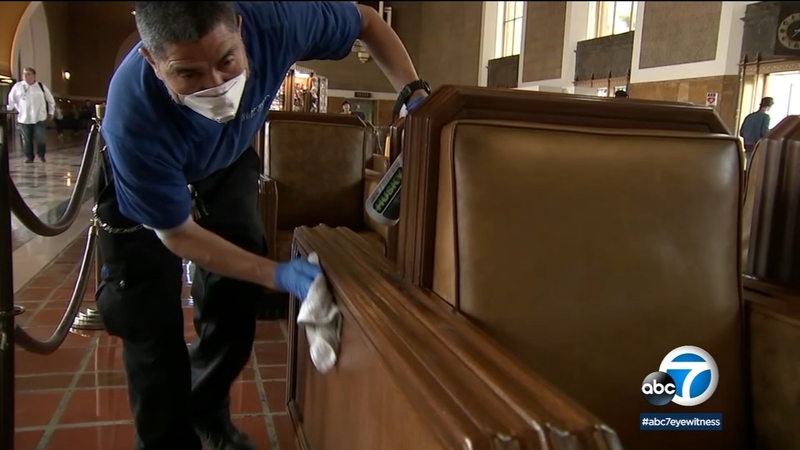 Janitors at Union Station say their lives are on the line as violence by homeless and mentally ill individuals at the iconic landmark has skyrocketed.

"One of my coworkers was actually attacked around 1 a.m., she was actually beaten by a homeless person here at the station," said Alberta Mendez through a translator.

The union representing the workers says 19 of the 21 janitors at Union Station have reported being threatened or assaulted. Officials say violent crime at the historic station is up dramatically -- 94% over this time last year.

"It's getting worse and worse, and we're here as a means to try and say, what can, not only what we can do as a union to help these workers to make sure they're protected, but also what the city has to do as a means to address the issues," said David Huerta, president of SEIU United Service Workers - West.

L.A. City Councilman Kevin de Leon and other county representatives joined janitors for a tour of what they face.

Open nearly 24 hours a day, Union Station has become a haven for the homeless.

The union says there is no law-enforcement contract for the station itself, only for metro and Amtrak lines. There is private security, but workers say they are unarmed and often don't want to get involved.

They are pleading with the city and county to take action before a worker loses their life.

"Our county department of mental health really has to step up and do their jobs," De Leon said. "Do to their responsibility by engaging with teams here. Also Union Station has to provide security for our workers."

Many workers say they fear speaking out, afraid that they could lose their jobs, but they say the conditions have gotten so dangerous that they have no choice, and are pleading with officials to finally take action.