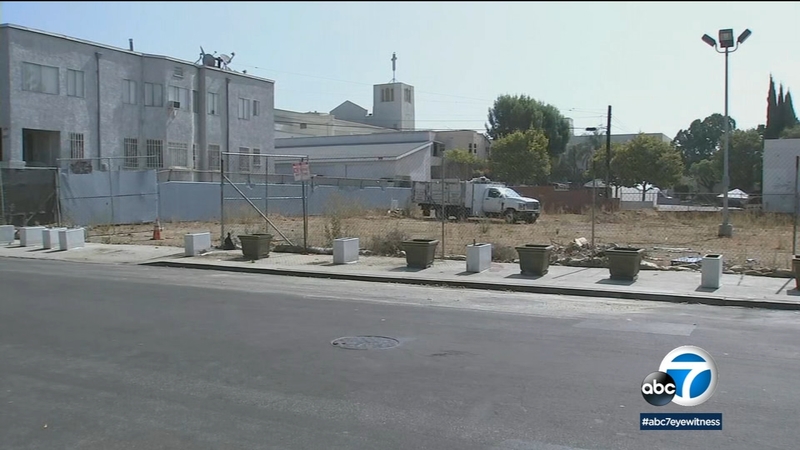 LOS FELIZ, LOS ANGELES (KABC) -- For nearly a year, the stretch of Berendo Street near Hollywood Boulevard was a dystopian scar on the Los Feliz neighborhood. The Los Angeles Police Department called the encampment a gang-run, drug-dealing hub.

"Residents on this block have been vandalized numerous times with gang tagging. I've had a knife pulled on me, telling me to stop talking to the press and to police," said one resident who asked that we not use his name.

But on July 23, the last of the encampment residents moved out. Los Angeles City Councilmember Nithya Raman tweeted that her office, working with the Los Angeles Homeless Services Authority and other groups, helped voluntarily move those people to indoor facilities.

By Saturday, people in the neighborhood installed concrete planters on the sidewalk where the tarps and tents had previously been set up. Residents call it a community garden. The planters also would make it difficult for anyone to set up a future encampment.

"All they want is to leave (American Disability Act) access here so anybody can pass, but also be able to plant something to have something beautiful here and have no more crime," said one neighbor.

But now the city of Los Angeles has issued a citation and is threatening to haul the planters away, claiming they obstruct the sidewalk.

"I think the hypocrisy is glaring," said Dave Bass, who lives on the block. "This is improving the general welfare. And the people who are against it, quite simply are trying to create anarchy under the guise of empathy."
Eyewitness News reached out to the city's Department of Public Works which, in a written statement, says the planters are not permitted.

"An application was received this week, but during the review process, which can sometimes be lengthy, the planters must be removed," reads the city statement.

But many of the people who live near the site are upset that it took almost a year to have the drug-dealing encampment cleared, but just hours for the city to crack down on the planters, which they say take up considerably less space than the tarps and tents that were here previously, and still allow enough space for people to get by.

Several of the residents here are working to recall Raman from office, blaming her for the extended encampment problem. They say many of the people who Raman claims were voluntarily moved indoors, are now just camping on the other side of Hollywood Boulevard, in a different council district.

Raman's staff says any communications it receives about the planters are forwarded to the Sanitation Bureau.