Gypsy Rose, most famous lowrider is from East Los Angeles 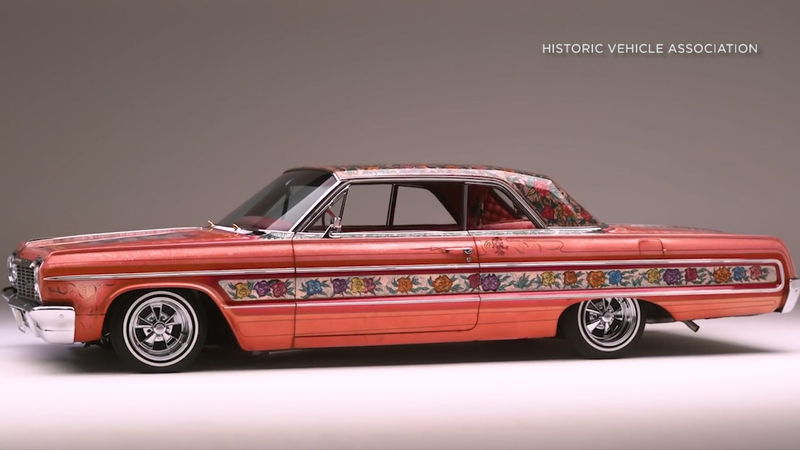 This lowrider is possibly the most famous of them all ever made, and she's from East Los Angeles, the Gypsy Rose.

EAST LOS ANGELES (KABC) -- This lowrider is most likely the most famous lowrider ever made, and she's from East Los Angeles, the Gypsy Rose.

"What made her famous is probably the opening credits of 'Chico and the Man,'" Jesse Valadez Ii, owner of the Gypsy Rose, said. "All of the sudden you see a lowrider go by and America got a glimpse of what a lowrider is."

Riding low and slow, the Gypsy Rose has travelled the world, won countless awards and in 2017 it became the first lowrider inducted into the National Historic Vehicle Register

"As a lowrider, representing the community, la raza, the people, it was a huge honor," Valadez said.

In the 1960s, Valadez's father created the first Gypsy Rose. Fast forward, now in its third incarnation it's vessled in a 1964 Chevy Impala, dressed in dozens of roses.

"It's abstract, it's unique, lots of roses, lots of veiling, lots of spider webbing, lots of scrolling," Valadez said. "It was an influence from my grandmother because she loved flowers, she loved roses."

The birth place of the gypsy rose was at his grandmother's and is now on exhibit at the Petersen Automotive Museum.

"I'm proud to be a second-generation lowrider from the imperials car club," Valadez said. "I'm proud to carry the legacy that my father started many years ago and he passed down the throne to me which is the Gypsy Rose."

The car will be on display at the museum until late September 2019, then it will hit the road to do some traveling.
Report a correction or typo
Related topics:
automotivelos angeles countyeast los angelescommunity journalistcarsin the community
Copyright © 2022 KABC Television, LLC. All rights reserved.
TOP STORIES
Portola HS basketball player target of racist slurs during game
Homeless camp near SoFi Stadium removed ahead of Super Bowl
Woman says Brianna Kupfer murder suspect also chased her
On the 2nd anniversary of the Kobe Bryant crash, trial nears
San Jose becomes 1st in US to require gun liability insurance
Video shows anti-masker lashing out at kids in La Crescenta
Super Bowl: Every fan at SoFi Stadium to receive KN95 mask
Show More
California likely to extend paid sick leave amid COVID pandemic
House Speaker Pelosi to run for reelection to Congress
Fed expected to hike interest rates in effort to tame inflation
Saturn's ice moon could support life
COVID pills in short supply, but here's where you can find them
More TOP STORIES News