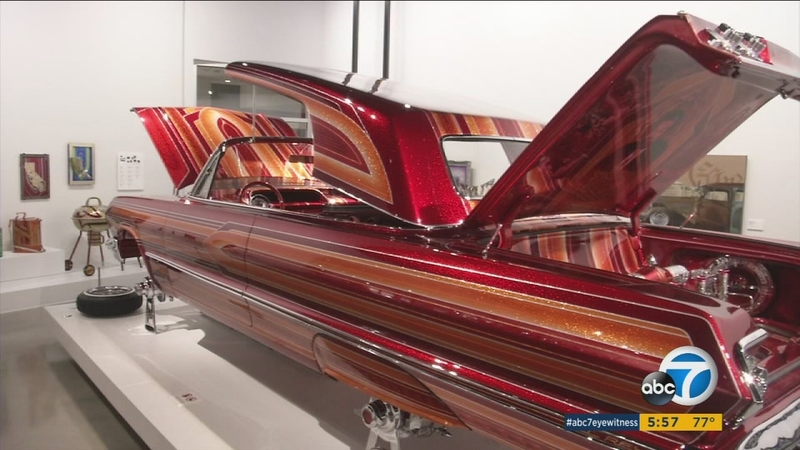 LOS ANGELES (KABC) -- The Petersen Automotive Museum is often known as a place to gaze at fast cars. Their newest exhibit celebrates cars known for going a little slower.

"Where hot rods were built for speed and lifted up to go fast, lowriders took it the opposite way. They took it to the ground. It's about going slow because you want people to look at your car and look at you," said Dr. Denise Sandoval, a CSUN professor of Chicano and Chicana studies who guest-curated the exhibit for the museum.

Cheech and Chong's breakout 1978 movie hit "Up in Smoke" featured a 1964 Chevy Impala as Cheech's pride and joy. And on display at the Petersen is a 1964 Impala that's the pride and joy of Southern California lowrider culture: Gypsy Rose. Noted for its elaborately airbrushed floral theme, it's arguably the most famous lowrider in the world.

Yes, the cars are rolling works of art. And the exhibit, called "The High Art of Riding Low," celebrates the cars and the art. There are lowrider cars on display, but also many forms of art related to the lowrider culture.

"It's really creating a new way to look at low-riding. And that's through the eyes and paint brushes and cameras and sculptures of artists," said Sandoval.

One noteworthy creation done just for this exhibit is a full-size pinata made to look like the Gypsy Rose Chevy.

And this art really does have to be seen in person to catch all the nuance. The exhibit is in the Arman Hammer Foundation Gallery on the museum's first floor and partly in the lobby. Two other previous lowrider exhibits did have more floor space, with more cars, but the museum's parking garage will be awash in various local lowriders this Sunday. The Petersen Museum is hosting a lowrider cruise-in beginning at 8 a.m.

"We're expecting between 250 and 300 lowriders putting on their own show in the parking lot. And there should be 1,000 spectators, if not more," said Adam Langsbard, the Petersen Museum's marketing director.