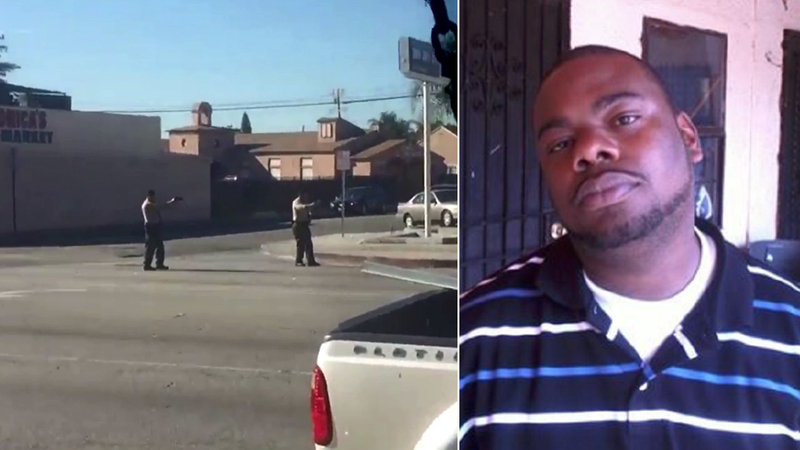 LYNWOOD, Calif. (KABC) -- A man suspected of shooting rounds into the air was killed Saturday in a deputy-involved shooting in Lynwood.

According to the Los Angeles County Sheriff's Department, the shooting happened around 11 a.m. outside of an Arco gas station near Long Beach Boulevard and Magnolia Avenue.

Deputies from the Century Station responded to the area after receiving multiple calls about a man in a checkered shirt with a gun and shots being fired.

An eyewitness who asked to remain anonymous captured video of the gunfire and said the suspect, identified as 28-year-old Nick Robertson, was shooting in the air and did not want to comply with commands.

Deputies at the scene said they yelled multiple commands at the suspect to drop the gun, but ended up opening fire when he didn't listen.

In the video, Robertson is seen walking away from officers and then several rounds are fired. He is seen injured, crawling on the ground. Deputies fire several more shots until he stops moving.

Other witnesses at the scene told authorities they saw the suspect turn and point the gun at the deputies prior to the shooting.

"The video is just one piece of evidence that's going to be examined as part of a comprehensive, long investigation and that'll be analyzed against the physical evidence, the witness statements and the deputies' statements," LASD Lt. Eddie Hernandez said.

No deputies were injured in the shooting. A loaded .45-caliber handgun was recovered from the scene, according to authorities.

Family members said they don't know how they are going to explain to his children why he is no longer around. They hope the video will lead to a criminal prosecution.

Precious Bradford, Robertson's sister, said she saw the video of her brother being shot to death by deputies.

"I want to assure the public that the Sheriff's Department takes deputy involved shootings very seriously and that this investigation will be handled with the utmost professionalism and integrity. We are working closely with our criminal justice system partners as well as members of the public to put together the most comprehensive and accurate account of exactly what occurred.

"In this modern age of cell phone video and instant analysis on the internet, I would ask that we keep in mind that a thorough and comprehensive investigation is detailed and time intensive. It will involve, not just one source of information, but numerous sources, potentially including multiple videos, physical evidence and eyewitness accounts. I urge anyone who has information about this shooting incident to contact our investigators. Our number one priority is public safety."