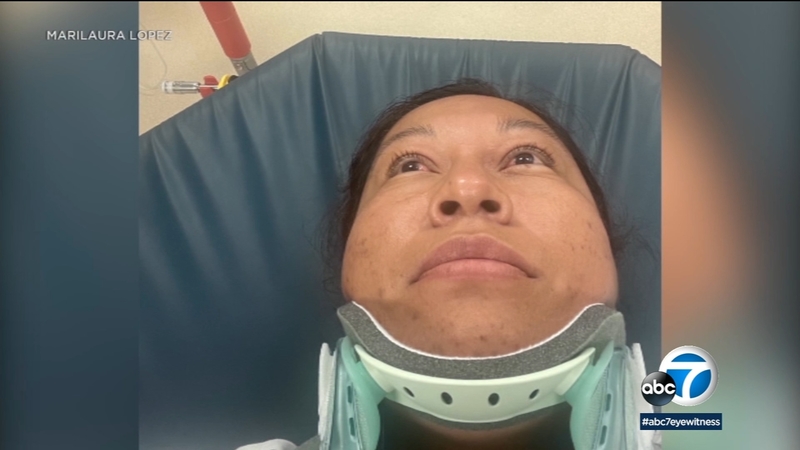 LYNWOOD, Calif. (KABC) -- A Lynwood community is rallying around a beloved street vendor who was attacked and robbed by four young women while working.

The suspects are still on the run.

Marilaura Lopez, now out of the hospital, says she was beaten and robbed on Oakwood Avenue near State Street last Sunday night.

She says it was just before 6:30 p.m. when she saw a silver sedan driving by.

Instead, two of them grabbed her by her arms. She was hit in the head, then struck again and again.

She says she'll never forget their laughter as they hit her over and over.

A photo of the vehicle is available, but the plates were removed. Surveillance video shows the car minutes before the attack driving back and forth on Oakwood.

Her money gone, Lopez says it hurts to lose a day's work.

She and her husband each work on average five days a week, 10 hours a day to help feed their four children.

But for Lopez the psychological trauma is worse.

She's afraid of returning to work while the suspects remain on the run.

Community advocates are organizing a fundraiser June 13 to support Lopez.

"We're reclaiming the same street where she was attacked," said Audrey Casas, president of the Lynwood-based community organization Mastering Hope. "We're gonna have the fundraiser in the same general area, the same street, so she has different memories there instead of feeling traumatized."

Lopez says she chose to speak up because enough is enough. It's not fair for vendors to be robbed of their right to live in peace, she says.

A GoFundMe page has also been started to help Lopez.

The Los Angeles County Sheriff's Department continues to investigate and is looking for additional video and witnesses. Anyone with information is asked to contact LASD or provide anonymous information to Crime Stoppers at 1-800-222-TIPS.