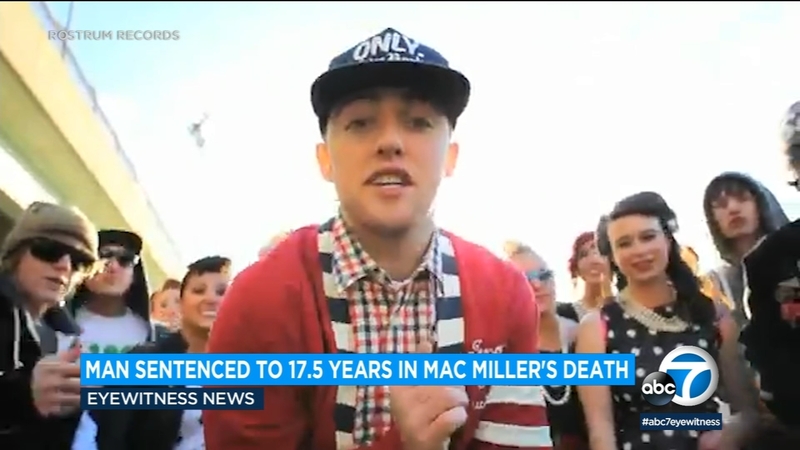 LOS ANGELES (KABC) -- A Westwood man was sentenced to more than 17 years in prison Monday for his role in supplying the fentanyl-laced pills that led to rapper Mac Miller's fatal overdose four years ago.

Stephen Walter, 49, pleaded guilty last year to a federal count of distribution of fentanyl, which carries a mandatory penalty of 20 years behind bars.

#BREAKING Stephen Walter, 1 of 3 people charged in accidental overdose death of rapper #macmiller has been sentenced to 17.5 years in prison. Letter was read from Miller’s mother "He would never knowingly take a pill with fentanyl. He wanted to live, was excited for the future." pic.twitter.com/pa4LNWtWBb

However, the parties entered into a plea agreement under which Walter would be subject to a 17-year prison term, according to the U.S. Attorney's Office.

The judge went over the recommended sentence saying Walter continued to sell the drugs after the rapper died.

In September 2018, Miller died of a drug overdose -- namely, a fatal mixture of fentanyl, cocaine and alcohol.

Just a few days before the 26-year-old rapper's death, Walter supplied the fentanyl that ultimately killed him, evidence shows.

Walter apologized to Miller's family during Monday's hearing, saying his "actions caused a lot of pain."

"For that I'm truly remorseful," he said. "I'm not the type of person that wants to hurt anyone."

Two others were also charged. Ryan Reavis, 39, pleaded guilty to the distribution charge and was sentenced in April to almost 11 years behind bars.

The case against Cameron Pettit, 30, of West Hollywood, is pending.

The pills traveled from Walter to Reavis, who supplied the counterfeit oxycodone pills to the third defendant, according to papers filed in Los Angeles federal court.

Reavis admitted knowing that the pills contained fentanyl or some other controlled substance.

Shortly after Reavis handed over the pills, Pettit allegedly supplied them to Malcolm McCormick -- who recorded and performed under the name Mac Miller -- two days before the rapper suffered a fatal overdose in Studio City on Sept. 7, 2018, federal prosecutors said.

During Walter's remarks, he claims he had "no idea" of the death and believed the drugs were for Pettit's personal use.

He said he "would've stopped" if he knew.

Miller began rapping at 14 and built a large following before signing with the label of fellow Pittsburgh rapper Wiz Khalifa.

Miller released five studio albums and a series of mix tapes during his career. His final album,

"Swimming,'' was released on Warner Records just a month before his death.