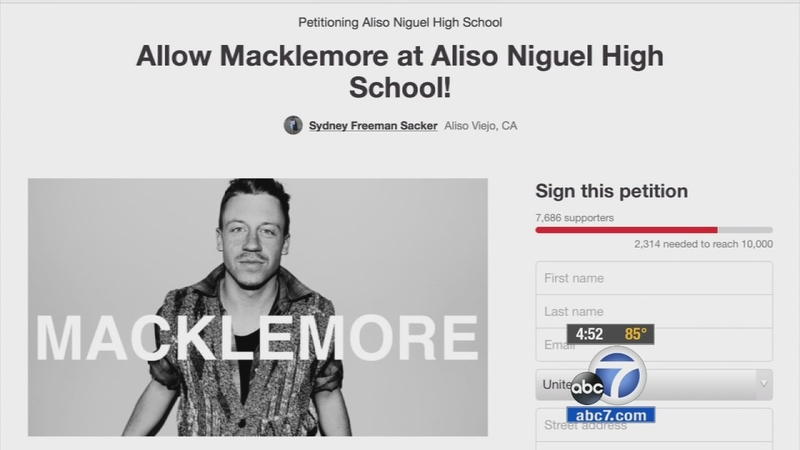 ALISO VIEJO, Calif. (KABC) -- A show will go on after the social media uproar of a principal's rejection of Macklemore and Ryan Lewis performing at an Aliso Viejo high school sparked controversy.

Students at Aliso Niguel High School chanted "bring back Mack!" stemming from the principal's decision to pull the plug on the visit from the hip hop artists.

Teens at the school won an online contest that included the group's appearance and a $10,000 donation to the music program.

"Six parents had come to her with either emails or phone calls saying, 'I don't want my kid subjected to this behavior,'" said Kayla Maher, a senior at the school.

In an Instagram post that started the protest, the student body vice president wrote: "Parents claim Macklemore and Ryan Lewis promote drug use and misogyny."

The post set off a social media firestorm, thousands signing an online petition. Macklemore himself tweeted about the initial decision.

"The parents are absolutely enraged that they would take away basically a student-led effort," said Christie Draper, mother of an Aliso Niguel student.

Then, just before lunch, the principal changed her tune with a surprise announcement of compromise.

"After careful consideration of varying viewpoints on all sides of the issue surrounding a possible visit by Macklemore and Ryan Lewis, it is my hope that we have developed a plan that will meet the needs of our diverse students."

The plan is to hold the event after school hours and require permission slips. The performance is set for Dec. 17.

As for the students, they say Macklemore's songs send inspiring messages of equality, love and standing up for what they believe in.