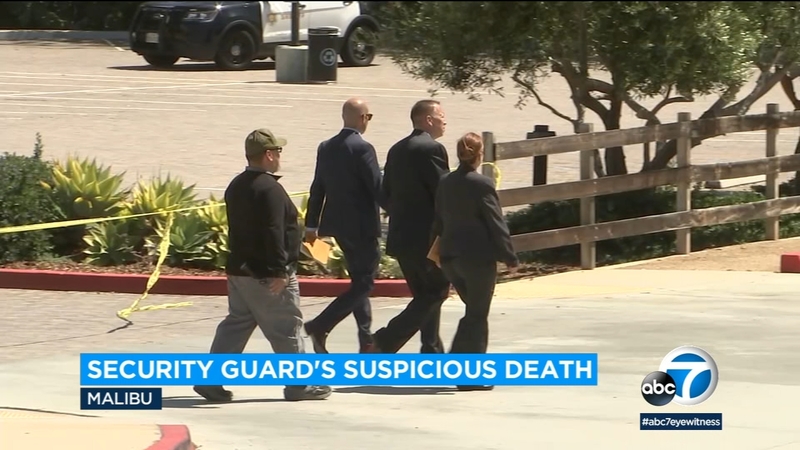 MALIBU, Calif. (KABC) -- An investigation is underway after a body was found near Zuma Beach in Malibu Tuesday morning.

The body was found in the parking lot of a shopping center on the 30000 block of Pacific Coast Highway, according to the Los Angeles County Sheriff's Department. Authorities say the body was discovered just after 7 a.m. by an employee who works in the area.

The victim was described as a 58-year-old man who worked as a security guard overnights at the shopping center, officials said. He was wearing a security uniform at the time his body was discovered.

Sheriff's detectives say the victim suffered blunt force trauma to his upper body and head, but they don't know what caused the injuries because a weapon has not been found.

"We don't know exactly what happened here. We don't know if it was possibly an accident. We don't know if it's at the hands of another. So we're looking at all aspects," said Lt. Vincent Ursini with the L.A. County Sheriff's Homicide Bureau. "We need to monitor, take a look at all the surveillance video that may be in the area, which may have captured some of the incident, and there's also, maybe some individuals that work in the area that need to be interviewed."

"It's tragic. So most of these guys that have worked here, worked here for a long time. They aren't guys that come in and work for a week, and then they are gone," said Chris Frost, chair of the Public Safety Commission in Malibu. "People in the neighborhoods know them. We greet them like that, you know, holidays, etc., so they are people we know. So I'm very sorry to hear that."

A cause of death has not been determined, but it's being treated as a homicide until investigators determine otherwise.