2 days of rain leads to rockslide along Malibu Canyon Road 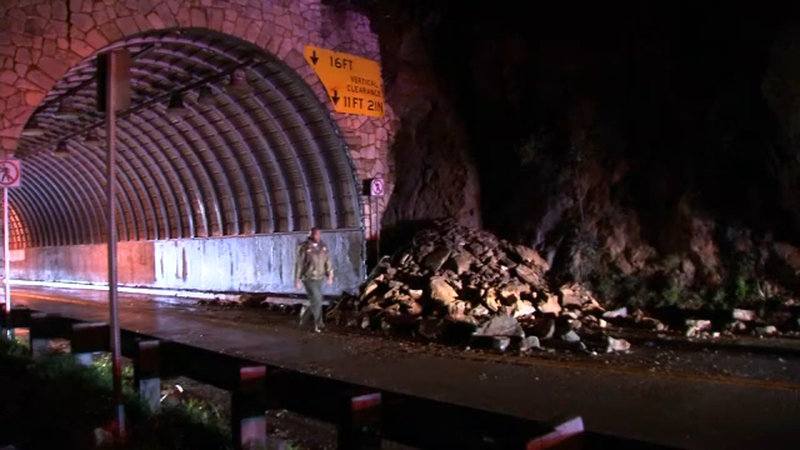 2 days of rain leads to rockslide on Malibu Canyon Road

Rocks and boulders covered one of the lanes on Malibu Canyon Road but didn't fall on any passing vehicles. They were brought down Tuesday night by a second straight day of rain in the burn area.

"Luckily, it was non-commute time, so traffic wasn't effected too heavily," said Ryan Row of the California Highway Patrol. "County roads is operating on 12-hour rotation shifts, clearing all the mountain roads away."

Pepperdine University student Amelia Edmonson made a quick trip to the supermarket and was on her way back home to Malibu when she got stopped by the rockslide.

"My initial thought was to turn around and go through the other canyon, but I don't think either canyon is going to be safe to drive through, so I figured I'd like to go to the one where there's people patrolling the area," Edmonson said.

More rain is forecast for Malibu Wednesday and Thursday, something that's on the mind of Alexander Hersel, who takes Malibu Canyon Road to work every day.

"I'm actually concerned that at that point, there will be much more issues with mudslides and these roads that we all travel. There's no other way to get to Malibu. It's very difficult," Hersel explained.

L.A. County sheriff's deputies evacuated Malibu neighborhoods Tuesday, knocking on doors to make sure residents were aware of the dangerous storm approaching. A wall of sandbags surrounded Paradise Cove Restaurant, which is under a mandatory evacuation, as well as the Malibu Park Neighborhood.

Malibu residents are preparing for more rain and potential mudslides as a series of storms continues to hit Southern California this week.

Authorities are urging anyone traveling on canyon roads to be alert.