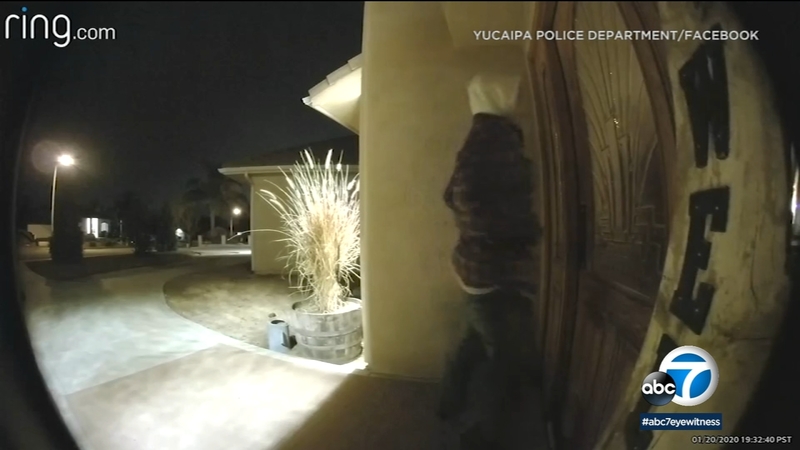 YUCAIPA, Calif. (KABC) -- Doorbell camera captures the moment a man violently tries to break into a home in Yucaipa as an elderly couple is trapped inside.

The incident happened Monday around 7:30 p.m. in the 35000 block of Persimmon Avenue. The video shows the man at the door. As soon as it opens, the man walks right in.

Detectives say it appears the suspect is under the influence and high on something. They say the act appears to be completely random.

One of the people in the home doesn't let the man get further inside and forces him to leave.

As soon as the suspect is outside, he then stands at the door while the people inside call 911.

Detectives are attempting to identify the man in the video.

The video has neighbors on the quiet street on edge.

Detectives hope the incident serves as a warning for others.

"We don't know if the person's intention was to burglarize the home, potentially assault the people who live there or if there was something else going on with him," said Lt. James Porter with the San Bernardino County Sheriff's Department. "We won't know that until we get the opportunity to find and talk to this person who is involved."

Anyone with information regarding the case is asked to contact the Yucaipa station at (909) 918-2305.
Report a correction or typo
Related topics:
yucaipasan bernardino countybreak in
Copyright © 2021 KABC-TV. All Rights Reserved.
More Videos
From CNN Newsource affiliates
TOP STORIES