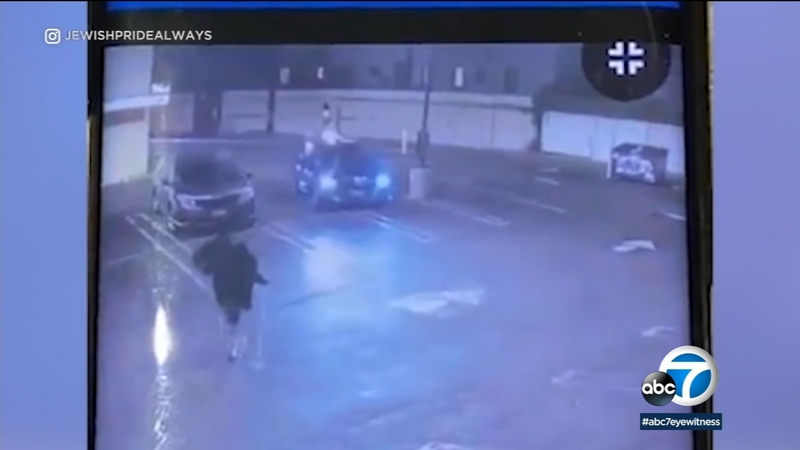 FAIRFAX DISTRICT, LOS ANGELES (KABC) -- Video has surfaced of an Orthodox Jewish man in the Fairfax District getting chased down by two vehicles as the passengers wave Palestinian flags.

The incident happened Tuesday night in the parking lot of a Bank of America near Rosewood Avenue and La Brea Boulevard.

The video, which has since gone viral, shows the man running for his life as the pair of vehicles nearly run him down.

The man was walking to his synagogue on La Brea at the time and says those in the vehicles were screaming "Allahu Akbar" at him.

"Thank God none of their other associates over there that were together with the 25 cars jumped out on me, and I was able to get in the synagogue, and I just locked the door behind me," said the man, who was too fearful of retribution to show his face on camera.
"I'm not willing to hide my Jewish identity because there's a few animals out there that want to live in Palestine," the man said.

Los Angeles police said it is aware of the video, and it is the subject of an investigation.

L.A. Councilman Paul Koretz says police will be stepping up patrols in the area.

"It's one thing to protest and drive around in caravans -- it's another thing for a bunch of people to jump off and viciously assault unsuspecting people sitting at an outdoor dining restaurant just because they appeared to be Jewish. And the folks they attacked weren't all Jewish. But that is the absolute definition of a hate crime."


A similar incident happened the same night on La Cienega Boulevard, with apparent pro-Palestinian protesters attacking diners outside a restaurant. That incident appears to be an anti-Semitic attack coming amid the renewed conflict between Israel and Palestinians.

LAPD is investigating both incidents as possible hate crimes.