The footage is part of a hate crime investigation launched by the Los Angeles Police Department.
KABC
By Rachel Brown 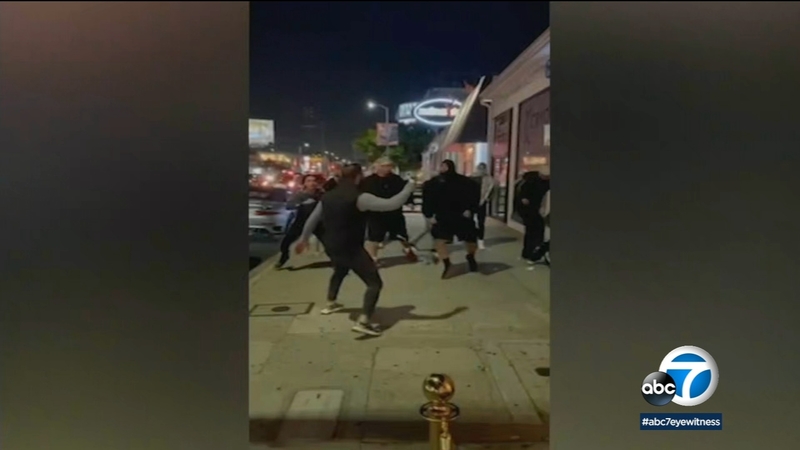 The incident appears to be an anti-Semitic attack coming amid a renewed conflict between Israel and Palestinians.

The footage is part of a hate crime investigation launched by the Los Angeles Police Department after the violent fight erupted on La Cienega Boulevard just before 10 p.m.
Witnesses told Eyewitness News that the pro-Palestinian group was yelling anti-Semitic remarks at the diners. Video of the chaotic scene shows several men punching another man on the sidewalk while bystanders shout.

We talked to the man in the video getting kicked and punched. He only wanted to be identified as M.

M said he was out to eat with four friends who are Jewish. They were celebrating an upcoming wedding when things took a violent turn with Palestinians who were protesting on the same street.

"We turned around, they start yelling. They stopped the car ... they were cussing at Jews," he said.

Hundreds of protesters shut down traffic as they took to the streets of Westwood in a rally Saturday calling for an end to Israeli airstrikes over the Gaza Strip.

M said within minutes glass bottles were thrown toward their table. Then video shows the men get out of their vehicle and push M's friend to the ground. That's when he grabbed the rope barrier.

"I realized I had to take something to scare them. There were many girls behind us. I was scared that they would attack everybody," he said.

The men followed M to his car, and the beating continued. Suffering from pepper spray burns and head trauma, M went to the hospital and is doing much better today.

M said he was thankful that the group wasn't armed with knives or guns. But he worries about both his Palestinian and Israeli friends who feel fearful during this time of unrest.

The Council on American-Islamic Relations released a statement saying in part, "We condemn this hate crime in the strongest possible terms and urge authorities to find and prosecute those responsible to the fullest extent of the law. According to the FBI's Hate Crime Statistics Report for 2019, the most recent publication year, Jews are the focus of 60 percent of religious bias-related hate crimes, targeted at a significantly higher rate than any other religious group."

A second anti-Semitic incident was also reported Tuesday, when the glass door of a kosher restaurant in Sherman Oaks was smashed.

The Anti-Defamation League is offering a $5,000 reward for information that leads to the attackers involved in the La Cienega incident.

Meanwhile, a similar incident happened the same night in the Fairfax District, with video showing an Orthodox Jewish man getting chased down by two vehicles as the passengers wave Palestinian flags.. That incident appears to be an anti-Semitic attack coming amid the renewed conflict between Israel and Palestinians.