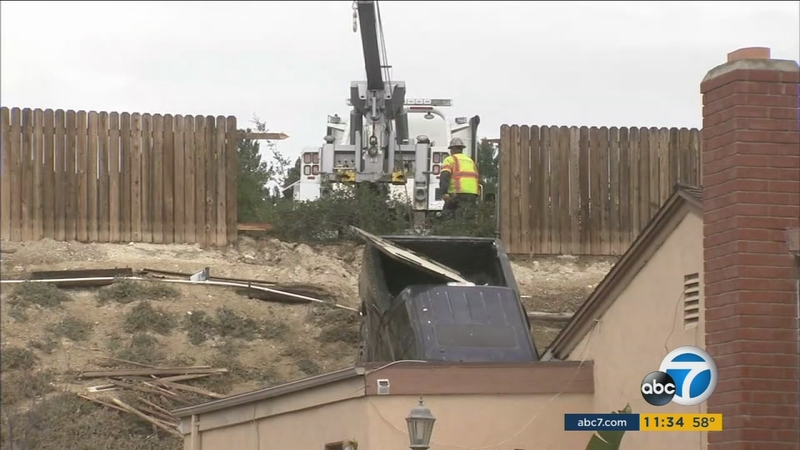 THOUSAND OAKS, Calif. (KABC) -- An elderly man visiting a family in Thousand Oaks was killed after a pick-up truck crashed into the back of the house early Thursday morning.

Authorities said the crash happened just before 2 a.m. in the 2600 block of Briarwood Place. The truck had come off a 40-foot embankment and smashed into the back of the home in a cul-de-sac.

"There was actually, I believe, five people in this home. The other ones were in a different part of the house and were not injured," Ventura County sheriff's Sgt. Jason Robarts said. "This individual was in that one room where the vehicle did go through the wall and ultimately killed him."

The 19-year-old male driver was taken into custody on suspicion of driving under the influence, police said. Rain conditions may also have been a factor in the crash, but it was unclear.

Authorities said the driver had gone through some brush for a while before flying off the embankment. The truck was eventually pulled out of the home and up the embankment by crews.

One neighbor, Robert Iman, has lived in the neighborhood for about 30 years and said the homeowners had just moved into the home. He added that they had just done extensive work to the residence.

Another neighbor, Wendy Dennis, walks in the area every day and said the brush in the area the truck drove through is so dense a car driving at a normal speed would have difficulty traveling in it.

"It's so sad. Right before Christmas - two lives changed forever," she said. "All it takes is a minute and your life can change. I had no idea something like this would happen in this neighborhood."

The identity of the victim has not been released, but authorities said the person was a relative visiting the family at the home.

The coroner arrived at the scene to pick up the victim's body.