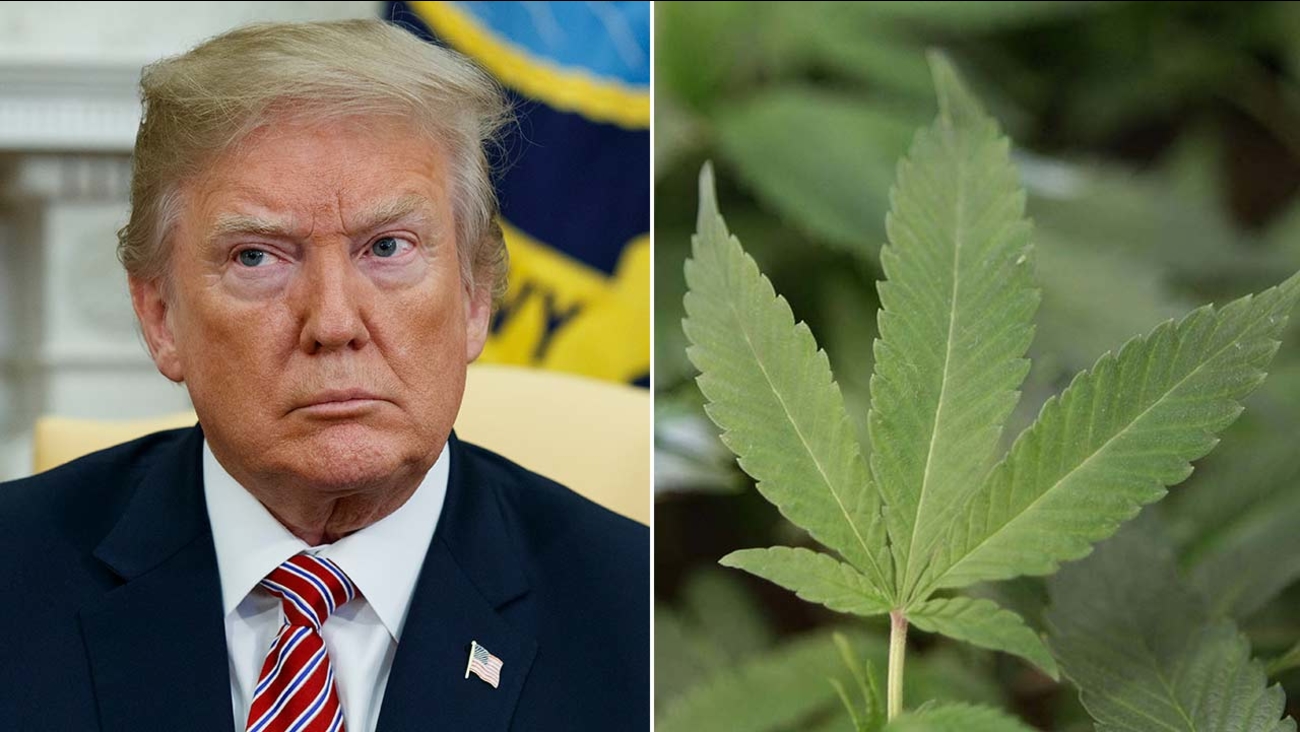 (Right) A marijuana leaf is seen in this file photo. (Left) President Trump listens during a meeting at the White House, Tuesday, April 10, 2018.

WASHINGTON -- President Donald Trump said Friday that he's inclined to support a bipartisan effort in Congress to ease the U.S. ban on marijuana, a proposal that would dramatically reshape the nation's legal landscape for pot users and businesses.

The federal ban that puts marijuana on the same level as LSD and heroin has created a conflict with more than two dozen states that have legalized pot in some form, creating a two-tiered enforcement system where cannabis can be both legal and not.

The legislation would ensure states have the right to determine the best approach to marijuana within their borders, but some U.S. restrictions would remain, including recreational sales to people under 21.

The proposal introduced Thursday has support from members of Congress from both parties, including Republican U.S. Sen. Cory Gardner of Colorado.

"I support Senator Gardner. I know exactly what he's doing," Trump told reporters in Washington, when asked about the legislation. "We're looking at it. But I probably will end up supporting that, yes."

The president's remarks place him in conflict with U.S. Attorney General Jeff Sessions, an outspoken opponent of marijuana who lifted an Obama administration policy and freed federal prosecutors to more aggressively pursue cases in states that have legalized marijuana.

Trump has sent mixed signals on the drug: While campaigning for president, he pledged to respect states that legalized marijuana, but he also has criticized legalization and implied it should be stopped.

Gardner said the legislation would ensure Washington respects the will of voters in each state, whether laws provide for legalization or prohibition.

He said in a statement released Thursday that the federal government "is closing its eyes and plugging its ears" to spreading legalization, but Washington should not interfere with any state's legal marijuana market.

Trump's remarks Friday echo a promise that Gardner said he received privately from the president in April to support legislation protecting the marijuana industry in states that have legalized the drug.

Another co-sponsor of the measure, Democratic U.S. Sen. Elizabeth Warren of Massachusetts, said in a statement that Washington "needs to get out of the business of outlawing marijuana."

California, home to one in eight Americans, launched the nation's largest legal marijuana marketplace on Jan. 1 but thousands of businesses that have been licensed are still facing the threat of federal prosecution.