Shortly after the vote came down, Ridley-Thomas issued a statement saying he'll continue to fight to clear his name.
KABC 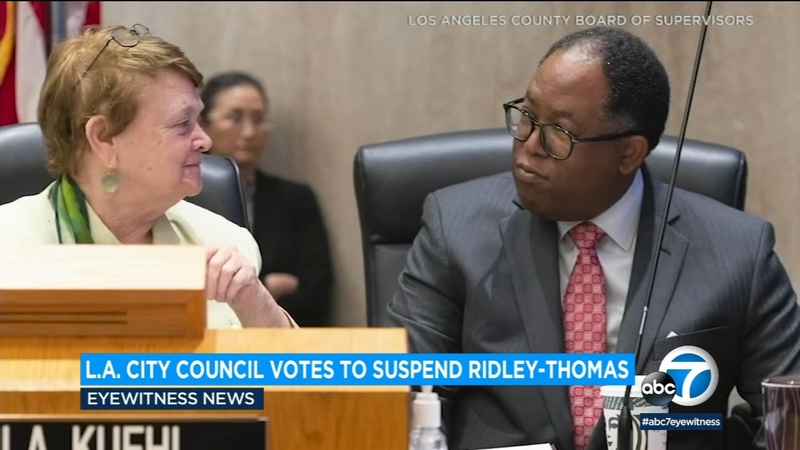 LOS ANGELES (KABC) -- The Los Angeles City Council voted 11-3 on Wednesday to suspend Councilman Mark Ridley-Thomas from office as he is set to be arraigned on federal bribery and conspiracy charges.

The motion to suspend Ridley-Thomas was introduced by Council President Nury Martinez and seconded by Councilman Mitch O'Farrell, the council president pro tem.

Shortly after the vote came down, Ridley-Thomas issued a statement saying he'll continue to fight to clear his name.

"I am humbled by the support of my colleagues who did not rush to judgement and disappointed in those who did," read the statement. "Eleven members of this Council have stripped the constituents of the 10th District of their representation, of their voice and of their right to the services that they deserve. They have removed from action a member - and his team - who together are among the most productive and effective advocates on the crisis of homelessness. I will continue fighting to clear my name, and I remain confident that such will be the case. But in the interim, the council has disenfranchised the residents of the 10th District."

"Today marks Day One of due process for Mark Ridley-Thomas," he said. "While some have rushed to judgment, perhaps for political gain, we all win when we afford our brother and sisters the constitutional entitlement to the presumption of innocence. Our lifelong public servant Mark Ridley-Thomas said today in Court that he is innocent; I invite our community to breathe life into that right."

"No one indicted for public corruption and suspended by the City Council should receive a taxpayer-funded salary," Galperin said.

L.A. City Councilman Mark Ridley-Thomas, who was indicted last week on federal corruption charges, said he will "immediately step back" from many of his duties, but will not resign.

After the federal corruption charges were filed against him, fellow City Councilman Joe Buscaino called for Ridley-Thomas to resign.

Ridley-Thomas told councilmembers in a letter he won't take part in city council meetings, but that he also will not resign and will fight what he calls "outrageous allegations."

The city council doesn't have the authority to remove a member from the council, but it does have the power to suspend. Last year, the council voted to suspend Jose Huizar, who was also indicted on federal corruption charges.

Meanwhile, Ridley-Thomas' former colleagues on the county board are launching their own investigation.

Supervisors Kathryn Barger and Hilda Solis called for the hiring of an outside law firm and a forensic auditor to look into Ridley-Thomas' official actions while on the board.

"The motion is about restoring trust," Solis said. "Transparency and accountability are values that should never be compromised."

She also allegedly arranged to funnel a $100,000 donation from Ridley-Thomas' campaign funds through the university to a nonprofit to be operated by his son.

In exchange, the indictment alleges, Ridley-Thomas supported county contracts involving the School of Social Work, including contracts to provide services to the county Department of Children and Family Services and Probation Department, as well as an amendment to a contract with the Department of Mental Health that would bring the school millions of dollars in new revenue.

Ridley-Thomas is scheduled to be arraigned Wednesday afternoon via Zoom. Flynn's arraignment was set for Oct. 25.