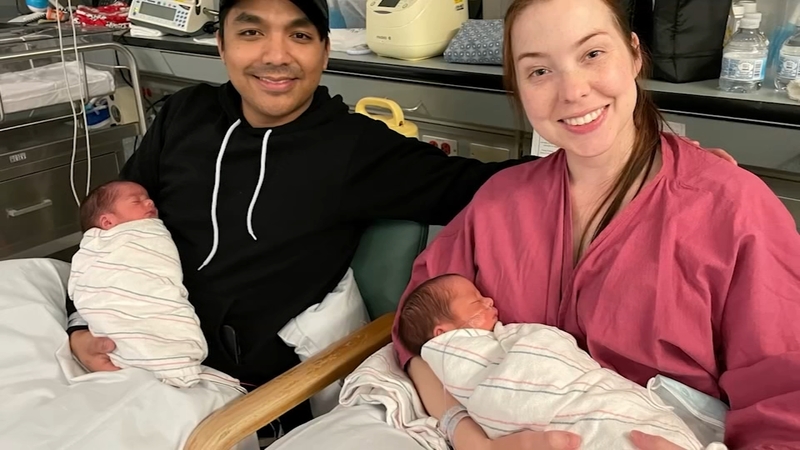 WHITTIER, Calif. -- Kelleigh Martin knew she had to stay calm. She was pregnant with twin boys, and doctors told her she was at high risk of premature labor that could endanger the lives of the little boys.

"They said you have to take medical leave, no driving, no going to the office, and no stress," Martin explained. "My goal was 38 weeks, with my doctor you know, 'let's try and reach 38 weeks.' And I started at 28 weeks."

So Martin, a Whittier resident, went on maternity leave, determined to carry her babies for at least 10 more weeks.

The Employment Development Department (EDD) had sent her three disability checks at the start of her medical leave, but suddenly the payments stopped.

So did her stress-free life.

"We were about to bring two babies into the world and suddenly I have no income, and I can't work," she recalled.

It turns out hers was among 345,000 claims the EDD flagged as potentially fraudulent, and froze, as it investigated a massive disability scam.

Bringing a new baby into the world is a time of joy and stress. But as many brought their newborns home, they found the EDD had frozen their benefits.

Fraudsters had stolen the identities of an estimated 27,000 California doctors and used their credentials to file phony disability claims. The EDD discovered the scam after thousands of fraudulent claims had already been approved. So it froze all claims deemed suspicious, which included many new ones -- as it happened, expectant mothers giving birth in December and January tended to be caught in the freeze.

An EDD representative said her doctors would receive a notice showing how to verify their identities. However, the doctors said they never received any notice, and could not get answers either.

"And here I am trying my hardest to resolve this issue with my doctor's office and with the EDD and the EDD is so backed up... you can't get hold of anyone," Martin said.

Suddenly her calm life erupted into a daily battle with the EDD.

"It really felt like a battle," Martin recalled. "You have to think strategically, knowing they open the phone lines at 8 o'clock in the morning but you can't get in the queue unless you are there at the right time. I'd wake up at 7:45 every morning, you call and call and call, and you get so good at dialing these numbers; first the EDD number, then you hit 1330, 1330, as fast as you can," she said, citing a now well-known trick for getting through the recorded messages to hopefully get into the queue to speak with a representative.

Most of the time, the calls hung up.

"We're sorry, the maximum number of callers waiting to reach a representative has been reached. Please call again," was the recorded message she got hundreds of times.

"And it's nothing. No answer is going to take that stress away but getting a brush-off is even more terrible," Martin said.

Martin tried hard not to let the stress affect her, but bills were piling up. Besides mortgage, utilities, groceries and car payments, her prenatal hospital bills had shot up into the thousands of dollars.

"I was on bedrest at home, trying to figure out 'How are we going to survive?'" she recalled, fighting back tears. "My husband doesn't make enough to support me, him and two babies on the way, plus now I have medical payments. We're doing everything we can to minimize my stress and then it just ends up kind of blowing up in our face."

Her disability had been approved and the couple had assumed that part of their new parenthood was covered. Instead, it ratcheted her stress.

"It became the biggest hindrance to my ability to remain stress-free and pregnant for as long as I could stay pregnant," she said.

And then, her worst fear became real. She went into labor three weeks too soon.

"I'm not saying it led to me giving birth prematurely," she said of the EDD ending her disability payments. "But it definitely didn't help."

Some unemployment recipients missed out on a big $10,200 tax break from the IRS because of how long the EDD took to deliver their delayed benefits.

The twins were born, then rushed to the Neonatal ICU.

One of the boys had to be put on a respirator.

"He wasn't able to breathe,'' she said, her voice shaking. "It's hard to see your son with, you know, the tubes going up his nose and a machine that's beeping, that's showing his oxygen saturation levels, and you're thinking, 'I hope that each breath is, you know, going to happen.'"

Their first weeks of life were a struggle to thrive.

Our sister station KGO-TV in San Francisco spoke with Martin as she waited for a chance to visit them in the NICU.

"They just need to gain a little weight, they need to learn how to eat," she said, her voice choking, breaking in tears. "Sorry, it's really hard."

Now Martin wonders if her sons could have avoided this difficult start of their lives if it hadn't been for the stress of trying to get a response from the EDD to get money she was entitled to.

"It feels like something from a dystopian novel," she said. "That shouldn't happen in real life. The government should not be able to directly impact the well being of my infant sons. Before they're even in this world, to have them impacted by a government agency in such a negative and profound way... it's mind-boggling."

RELATED: Nearly 1M self-employed suddenly required to prove they deserved EDD benefits or pay it all back

The hardest part, she says, is leaving the two babies at the hospital each night.

"Just being separated from your children, there's nothing that can ever prepare you for that," Martin said as tears ran down her face.

She shows pictures of the two tiny swaddled boys in their cribs at the hospital. It brings a smile.

"My husband and I, we spend a good four hours with them every day and we're working hard to stay positive," she said.

Still, Martin had no EDD benefits. KGO-TV told an EDD representative about the little boys, struggling to live.

The EDD made all the back payments.

The Department of Labor has agreed not to make workers repay benefits they received by mistake, as long as they were not obtained by fraud.

But the best gift of all?

After 19 days in the NICU, the boys were both at home, now nestled in their cribs in a yellow-decorated nursery, their pajamas matching their printed sheets.

"They are here, and they are healthy," Martin said with a breath of relief.

"This is River," Martin says, holding the older of the twins. "And Forest." She cradles the younger twin, now breathing on his own.

"I can't say enough how much I appreciate your help," she said. "It was exactly what I needed at the time I needed it."

Note: The EDD says it's working as fast as possible to separate the fraudulent disability claims from real ones. This all started when crooks stole identities of thousands of California doctors, and used their credentials to authorize phony claims. It means thousands of people who really need disability benefits have been left without them.