He was fired over the district's handling of a donation given to the school by former student and NBA player Josh Childress.
KABC
By Carlos Granda 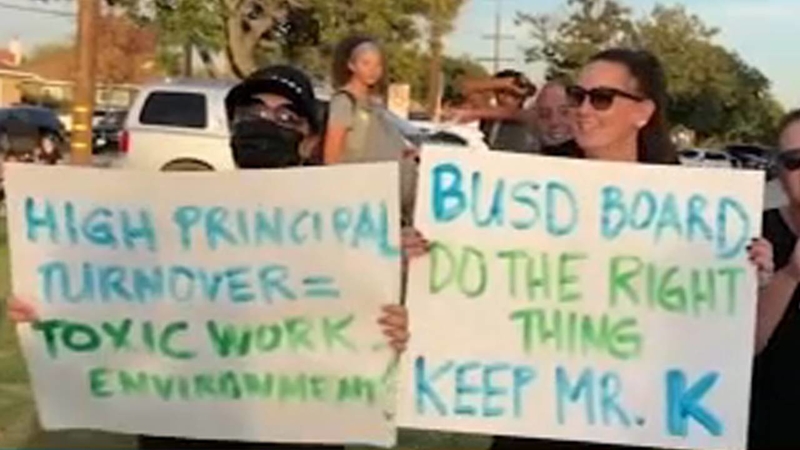 LAKEWOOD, Calif. (KABC) -- The principal at Mayfair High School in Lakewood was fired over the handling of a donation given to the school by a former NBA player, and parents and students are fighting to get him back.

Josh Childress, a California native who played for several NBA teams throughout his career, made a donation to the school to upgrade its weight room as part of his commitment to community development.

It is a special day for @SoonsFootball & @MHSMonsoons as we dedicate the new Childress Athletic Performance Center presented by TruGrit. Thank you to @JChillin and TruGrit performance athletics for making this all possible. #UNCOMMON pic.twitter.com/il935AGyM1

"We had the same weight equipment in the weight room that was there when I was a student there 20 years ago, and it was old when I was there," said Childress.

However, the Bellflower Unified School District wasn't on board with the allocation.

The principal, Mark Kailiponi, reportedly checked with the district, but parents claim BUSD's superintendent, Tracy McSparren, then demanded the money be sent to the district directly and it would then decide where the money goes next.

Childress said his foundation, The Childress Foundation, decided to send the donation to the Mayfair High School Sports Booster Club instead.

"From all the research that I've done, the district has mismanaged funds numerous times, and so both of those kind of things combined made me feel much more compelled to give directly to the school," said Childress.

Parents at the school claim the weight room was indeed upgraded and say McSparren then forced out Kailiponi.

"It comes down to greed with the district and he did what was best for the students and it cost him his job," said parent Yolanda Melendez.

"Mr. K should stay because he has made such an incredible impact, not only on the school but the students as well," she said. "He cares for every single one of us, students, teachers, his subs. It doesn't matter who it is, he cares and he loves them all."

According to records, in 2020, the Los Angeles County Office of Education filed a lawsuit alleging BUSD refused to comply with state rules and illegally used public funds.

Eyewitness News contacted BUSD for a statement from the district and McSparren, but has not received a response.

Parents told ABC7 they will continue to fight to bring the principal back.

They said they plan to bring up the topic during the BUSD board meeting this Thursday to protest the district's decision.