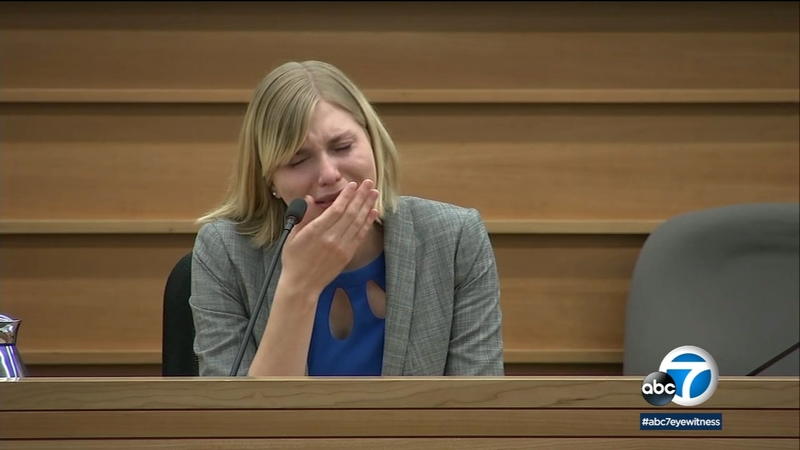 SAN BERNARDINO, Calif. (KABC) -- Two months into the murder trial of Charles "Chase" Merritt for killing the McStay family, the defense got to present its case to the jury.

But prior to the day's proceedings San Bernardino County Superior Court Judge addressed Gov. Gavin Newsom's moratorium on the death penalty telling jurors, "Governor Gavin Newsom has indicated he is intending on announcing a moratorium on death penalty. Number one that has absolutely no effect on this phase of the trial to determine if Mr. Merritt is guilty or not. Number two, don't consider that for any purpose whatsoever. I will tell you what the law is and what your responsibilities are in this case."

The capital murder case is still in the guilt and innocence portion but if the juror comes back with a guilty verdict it will go to a penalty phase.

The first witness to take the stand for the defense was Merritt's oldest daughter. Sara Taylor Jarvis testified to being in the room when her parents had an argument regarding his habit of not answering phone calls.

"I remember being in the vicinity of him when the conversation between my mom and dad occurred after his phone rang and it was Joseph and he didn't take the call," said Jarvis.

Jarvis recalls the date as Feb. 4, 2010. It was the last call Joseph McStay, Merritt's business partner, allegedly made to her father.

Jarvis said the call occurred in the evening, punching a hole in the prosecution's timeline of events. That's the day the prosecution believe the McStay family was bludgeoned to death in their Fallbrook home.

The remains of McStay, his wife Summer and their two young boys were discovered three year later in two shallow graves in the high desert.

The prosecution says that call was never placed to Merritt's cellphone on the date or time Jarvis indicated.

During cross-examination, San Bernardino County Deputy District Attorney Melissa Rodriguez asked Jarvis if she was being coached and working for the defense.

"You have actually assisted your dad's defense with the case? Right?" said Rodriguez.

"I mean I've tried to be involved. I think they are patient with me, tolerate me maybe because I'm going to law school this fall. I'm trying to keep up with what is happening," responded Jarvis.

During re-direct defense attorney Raja Maline drew an emotional response to his questions about Jarvis' role in the murder trial.

"In the entire four-and-a-half year period that you have been visiting your dad, has he ever once told you to lie for him?" asked Maline.

The defense also countered the prosecution's claim that the murders were the result of Merritt's financial troubles and gambling debts.

Jarvis testified her father was a good poker player who would enter poker tournaments or visit the casino to play to sometimes earn a little money on the side. But the prosecution used Jarvis' own interview with detectives in 2014 to contradict her testimony on the stand.

"Is that the wording that you used with Detective Steers that your dad was irresponsible with money?" asked Rodriguez.

The mother of Merritt's three children also took the stand. Katherine Jarvis told the courtroom she handled most of the household finances and the finances of one of Merritt's earlier businesses. She described Merritt as a creative free spirit uninterested in bookkeeping.

"He was very artistic, very creative, he could build anything, and he was a hard worker and that's what he spent most of his time doing," said Katherine Jarvis.