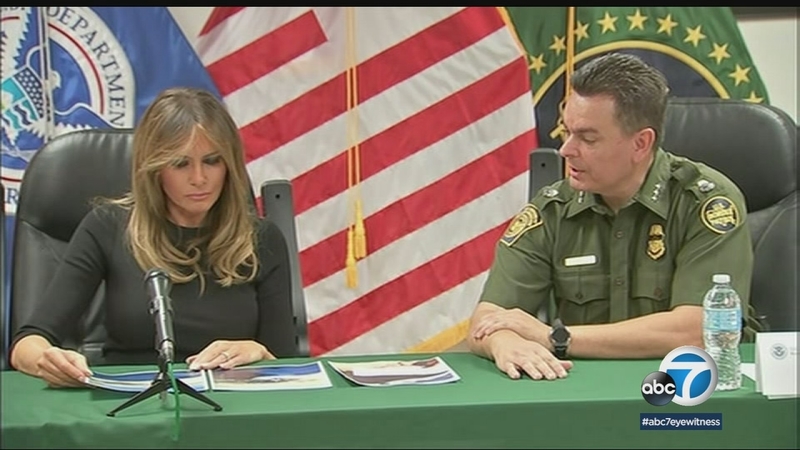 WASHINGTON -- Melania Trump headed toward the Arizona-Mexico border Thursday for a do-over with customs officials, children and others dealing with her husband's strict immigration policy.

"She cares about children deeply and when the news started to hit I think she was very concerned and wanted to make sure the kids are being well taken-care of," said her spokeswoman, Stephanie Grisham. "She doesn't like to see parents and kids separated."

This time, Mrs. Trump made a risk-averse fashion choice of bland black sweater, white slacks and flat shoes when she boarded her jet at Joint Base Andrews in Maryland. The do-over came a week after Mrs. Trump wore a jacket with a message on the back to and from the border town of McAllen, Texas, that overshadowed her visit with officials and some migrant children.

Her jacket said in white letters on the back: "I really don't care, do u?" The choice baffled the Internet and spawned a slew of memes about what the first lady, a former model, may have meant.

Her spokeswoman said it was just a jacket, with no hidden message. But the first lady's husband, President Donald Trump, undercut the no-message message by tweeting that his wife was saying she really doesn't care about the "fake news" media.

This time, Mrs. Trump seemed averse to distractions. She was to have a roundtable and tour an intake facility in Tucson, Grisham said. The first lady was expected to meet with local members of the community, including a rancher. Tucson is about two hours from the U.S.-Mexico border.

"She really wants to learn" about the process making news around the world for cases in which parents are separated from their children, Grisham said.

Mrs. Trump is traveling at a tense time in the United States, amid increasing urgency over how the Trump administration's immigration policy is playing out.