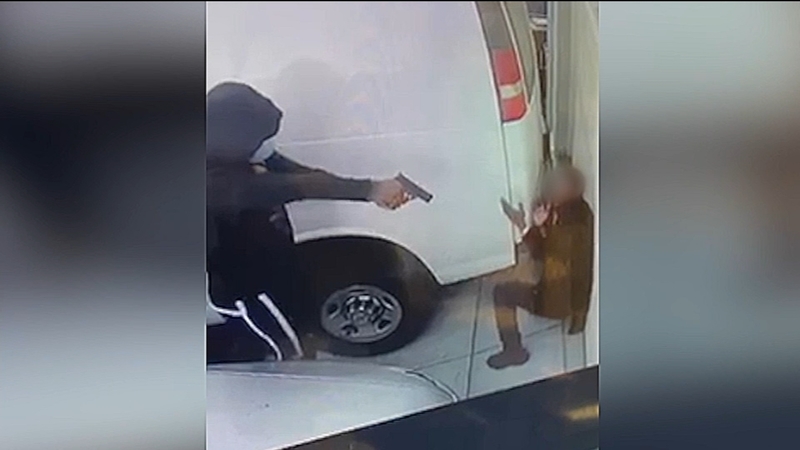 LOS ANGELES (KABC) -- A barbershop employee was held at gunpoint in the latest in a rash of violent crimes and robberies taking place in one of Los Angeles' most trendy shopping districts.

Surveillance footage shows an employee of the Oldboy Barbershop, located on Melrose Avenue, ducking for cover behind a van while being held at gunpoint for money by a suspect in dark clothing.

Nobody was hurt in the incident. A detailed description of the suspect was not available.

Staying in business is hard enough during the pandemic and the owner, who asked to not appear on camera, says the string of robberies isn't helping.

"I hear people in my community talking about, you know, we got to help our brothers and we got to support each other and stuff like that and I then I see this and it's really embarrassing," he said.

The owner says they'll be stepping up security to try to prevent any further crimes.

This comes about one week after another armed robbery, also on Melrose Avenue, was captured on surveillance video. The footage showed two men walking up to sidewalk diners at a popular cafe in Fairfax Village, pointing a gun at them and fleeing with their purses and shopping bags.

One suspect has been arrested in connection with that crime.

Last month, an employee of the Shoe Palace, located at Melrose and North Genesee, was shot and killed outside the store.

Witnesses and investigators said the incident started with a dispute over a raffle the store was holding over a pair of sneakers. The employee who was shot was just arriving to work and saw a crowd arguing outside the store and tried to intervene.

A witness said the employee appeared to be trying to de-escalate the situation and was backing away when he was shot. A 16-year-old boy was later arrested in the fatal shooting.

The uptick of crimes has business owners in the area on edge.

"A man's life is worth more than a pair of shoes. You can get a job and buy shoes, but you can't replace his life," said business owner Reginald Charles.