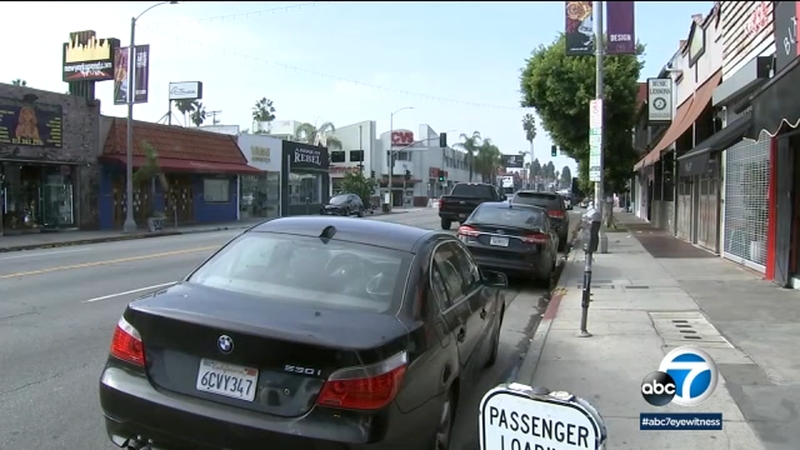 LOS ANGELES (KABC) -- The Los Angeles Police Department has issued a safety bulletin for parts of the city that have experienced an increase in crime, such as Melrose Avenue, the Jewelry District, nightclubs and high-end restaurants.

When it comes to crime, the conversation along Melrose Avenue these days is just as much about what you don't see, as what you do.

"Business is down like 30-something percent from 2019 numbers," said Dom DeLuca, who owns Brooklyn Projects.

A trend of violent crime was perhaps never as high-profile this year as it was in September, with gunpoint robberies targeting customers and businesses along Melrose. The statistics have fluctuated since then with more officers patrolling the area.

The volatility has not totally eased, as proven on Saturday Nov. 6, when the LAPD says a man tried stealing from someone along a Melrose sidewalk. The victim, according to police, tried grabbing the gun. No one was hurt, but the LAPD says it was the wrong move.

"Cooperate with that person," said Chief Michael Moore. "There's nothing on your person that's worth your life."

The department also wants people, in general, to be aware of their surroundings, think twice about showing valuable jewelry and pay attention to any cars that may be following you - near Melrose or otherwise.

Authorities issued the safety bulletin in response to a trend in robberies in which people are being followed home or to their business.

We are sharing this community alert in an effort to increase awareness of a series of robberies occurring in the City of Los Angeles. pic.twitter.com/mE5vVfCZZo

Blackbird Pizza Shop owner Luis Ulloa feels the increase in officers on horseback and in squad cars has helped deter some crime.

Right now, he's not as worried about his life as his livelihood. He says more of his customers have moved to delivery due to fear.

He and DeLuca think the more confidence people have in visiting Melrose, especially around the holidays, the better, and safer, the community will be.

"I think that would help everybody," said Ulloa. "I feel safe. I absolutely feel safe."