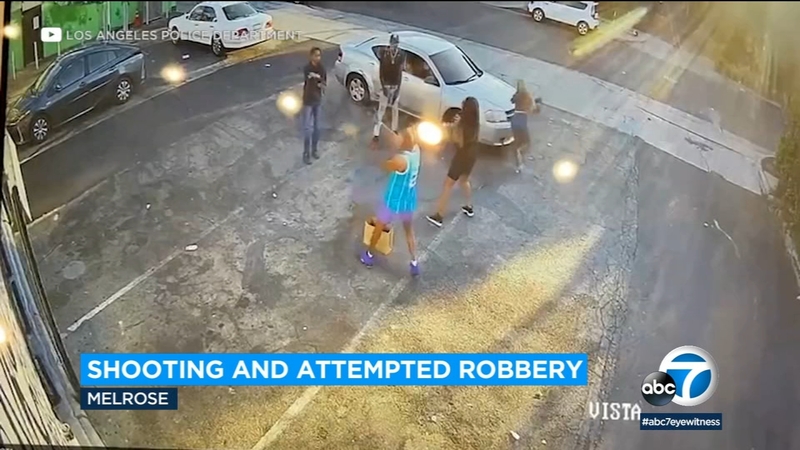 LOS ANGELES (KABC) -- Two men who tried to rob some shoppers on Melrose Avenue ended up with bullets in their legs after one of the victims turned the tables and opened fire on the would-be robbers.

A man with a shopping bag and two women are standing in a parking area when a light-colored Dodge Avenger backs up near them.

Two men get out from the passenger side, and exchange words, with one of them showing a gun.

But the robbery target draws his own weapon and fires. The shots send everyone scattering in different directions, with the car driving off and the two robbers running on foot in the opposite direction.

Police later arrested the two suspects who fled the scene on foot - and say both of them were injured by gunfire. Investigators are are still looking for the driver of the Dodge Avenger.

Police identified one suspect as Nicholas Brown, 22, of Los Angeles. He was already on parole and was booked for attempted robbery. He was struck by a bullet in his upper left thigh, police say.

The other suspect in custody is Markeil Hayes, 28, of Los Angeles. He was also on parole and was booked for attempted robbery. He was shot in the right calf.

The Los Angeles Police Department noted there has been an increase in such robberies on Melrose in the past year.

"The Los Angeles Police Department is aggressively addressing a rise in violent crime in the Melrose area over the past year and is pursuing all leads involved in this and other crimes," the department wrote.