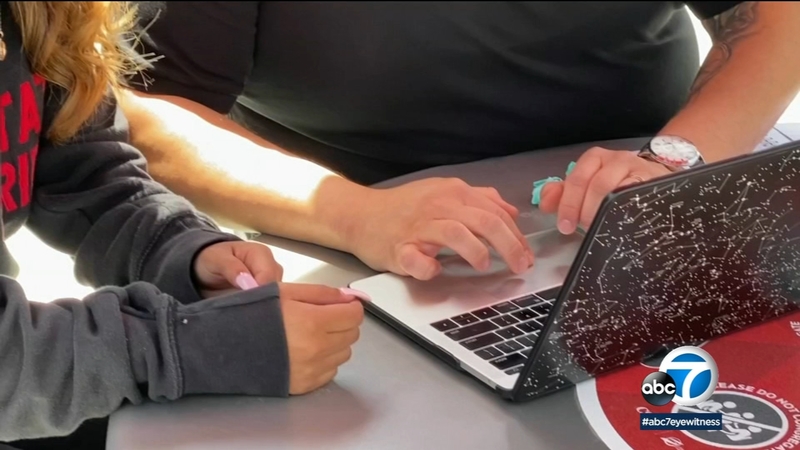 NORTHRIDGE, LOS ANGELES (KABC) -- Going from high school to college is so daunting, many students just don't show up, but one mentorship program is helping students keep their academic dreams alive.

Haylee Guerra was anxious about attending college. The Cal State Northridge freshman says not only was it virtual, but she was the first in her family to attend a university and she didn't know what to expect.

Lizbeth Bautista is her mentor at CSUN and the person Guerra credits for making her freshman year less intimidating and more rewarding. Bautista helped her enroll in classes and Guerra says she would've felt lost if it wasn't for her help.

"It was the...greatest thing that could have ever happened to me because I got so much support and comfort from her. She always had the answers for me," she said.

The two connected as first-time mentor and mentee through the Alliance Mentorship Program (AMP), which is offered at Alliance Margaret M. Bloomfield High School in Huntington Park, where they both attended.

Eighteen Los Angeles high schools are part of the Alliance College-Ready Public Schools. The mentorship program, offered at all 18 campuses, is now in its 9th year.

The six-month peer-to-peer program pairs high school seniors with mentors who are established college students to ensure students who get accepted to college actually go.

According to Harvard University's Center for Education Policy Research, "as many as 40% of low-income minority students that gain acceptance to college don't show up the first day of class."

It's a phenomenon called the "summer melt," traditionally referring to students who change their minds about the college they chose to attend.

But in this case, it refers to students from low-income homes who, without access to internet and other resources, find the enrollment process so overwhelming, they put it off and oftentimes choose a job over college.

"We make sure that we support them, we guide them through the process so that they can show up to class on Day 1, ready to complete their academic journey," said mentorship program manager Esau Molina.

A recent impact report shows a 95% matriculation rate among AMP mentees in 2020, compared to 88% for those not enrolled in AMP -- and the trend remained consistent for the last four years.