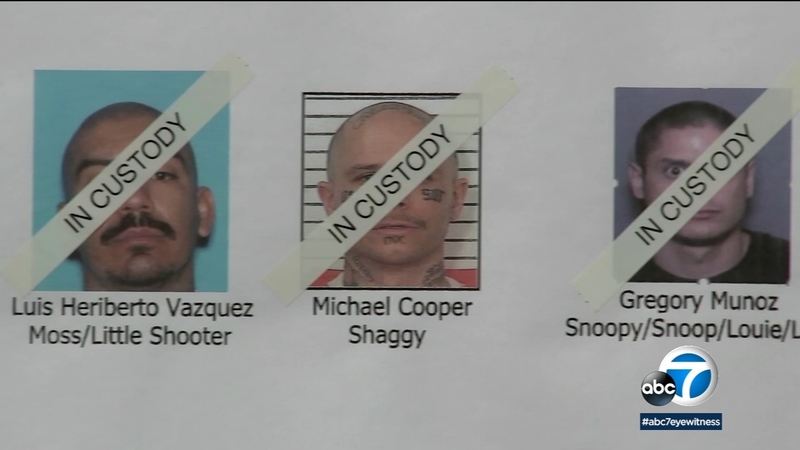 "The indictment reflects a sustained team effort to bring people who terrorize our community to justice for their years of violence and narcotics trafficking in Southern California and beyond," said David Jafee, organized crime and gang section chief with the U.S. Department of Justice.

This stems back to an investigation in 2017. The FBI says that since then, they've learned that most of the Latino gangsters in Orange County are controlled or have ties to the Mexican Mafia, also known as La Eme.

The 31 suspects are listed in a 33-count indictment announced Wednesday by the Department of Justice. It includes charges of conspiring to violate the Racketeer Influenced and Corrupt Organizations (RICO) Act, committing violent crimes in aid of racketeering (VICAR), allegations of two murders, six attempted killings, extortion and drug trafficking in Orange County.

"The violence, drug-dealing and other criminal acts being committed in our communities by gangsters associated with the Mexican Mafia is being met with the strongest possible response by law enforcement," said United States Attorney Tracy L. Wilkison. "We will continue to investigate, arrest and prosecute these individuals to the fullest extent of the law to restore a sense of safety to so many neighborhoods that have felt the impact of their destructive conduct."

Authorities say La Eme is comprised mostly of senior members of Latino street gangs who came together to control and profit from the activities of other Latino gangs operating in Southern California and within the California penal system.

Allegedly, the Mexican Mafia members divided control of various areas in Southern California, with the member in control of a specific area controlling the criminal activities in that territory and receiving taxes paid by gangs to allow them to deal drugs in that area.

Surveillance video from a Placentia home recorded in January 2017 allegedly shows two of the suspects charged in this indictment shooting and killing a 35-year-old man because he refused to pay gang taxes on drug sales.

"The Mexican Mafia allegedly preyed on vulnerable communities through fear, violence, and intimidation," said Assistant Attorney General Kenneth A. Polite, Jr. of the Justice Department's Criminal Division. "This indictment sends a clear message that the Criminal Division, and our federal, state, and local partners, remain committed to protecting all of our communities from violence and exploitation."

Police have dubbed the crimes "follow-home robberies" and say their frequency has skyrocketed over the past two years.

Investigators say since the 2018 death of a man known as the godfather of the Mexican Mafia, Peter Ojeda, there has been increased violence as gangsters work to fill that void and take charge, terrorizing vulnerable communities.

The FBI says one of the challenges in taking down La Eme is the way they communicate in code to avoid detection.

"Members assume they're under surveillance and are being wire-tapped at all times," FBI Special Agent Briant Gilhooly said. "There are serious repercussions for gang members who do not use the code to communicate and members who do not adhere to the rules are met with violence, including death. These tactics illustrate the way in which the Mexican Mafia's hierarchy operates.

In an effort to help dismantle leadership in this criminal organization, prosecutors are looking to move suspects already in custody to federal prisons throughout the nation.

The latest of those arrests were made Wednesday morning, eight in total, with six of them in Orange County.

Federal prosecutors and local law enforcement say the search continues for one remaining fugitive, Mark Cooper, believed to be in Oregon.