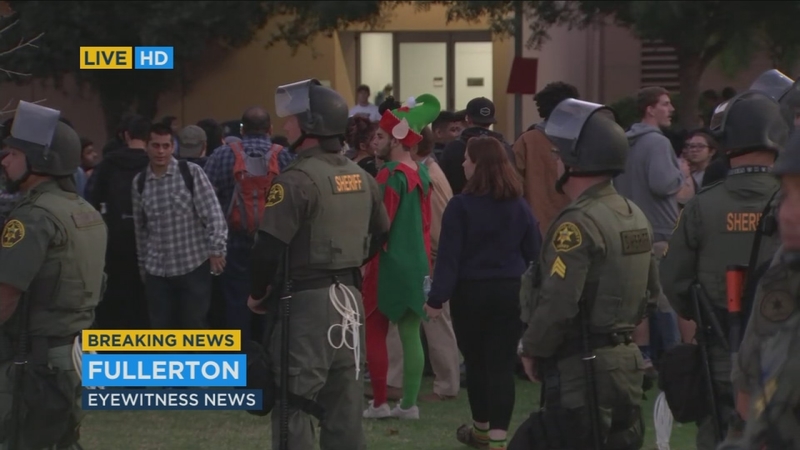 7 arrested outside Yiannopoulos speech at CSUF

FULLERTON, Calif. (KABC) -- At least seven protesters were arrested outside a venue on the California State Fullerton campus where controversial conservative provocateur Milo Yiannopoulos spoke Tuesday night, according to the university.

By 5:30 p.m. Tuesday, a crowd of protesters had gathered outside the barricades surrounding the speech venue on campus. Many could be seen holding signs and congregating in a grassy area several feet away from barricades guarded by police.

The university made preparations for Yiannopoulos to speak early this week, including extensive security measures.

Fencing was placed all around the student union, where he will speak, in hopes of preventing violent clashes like the scene at UC Berkeley, where Yiannopoulos' event was canceled in February.

"There's immature people on both sides, where fighting is what their main goal is and why they show up to these events," said Santa Ana resident Mike Tattivi, whose baseball cap bore President Trump's campaign slogan "MAKE AMERICA GREAT AGAIN."

Tickets to see the former senior editor of Breitbart were sold out.

"While this may be a speech that some people find objectionable, this is consistent with our policy," said Jeff Cook, CSUF's chief communications officer.
Yiannopoulos said ahead of the speech that he planned to address sexual assault allegations against actor Kevin Spacey and producer Harvey Weinstein in a Halloween-night speech at Cal State Fullerton.

Milo Yiannopoulos said ahead of the speech that he planned to address sexual assault allegations against actor Kevin Spacey and producer Harvey Weinstein in a Halloween-night speech at Cal State Fullerton.

"This is a place you should be able to be, do and say anything," he said during the event, wearing a multicolored blaze and a priest's collar. "And tonight, of all nights, I encourage you to do so."

"We have a freedom of speech problem," Pena said, "and we definitely gotta get a solution to get everyone on board, on the same page."

Yiannopoulos, who stirred up his own firestorm in February after a video surfaced in which the Breitbart editor appeared to be condoning relationships between older men and underage boys. Yiannopoulos resigned from his post at Breitbart in the wake of social media backlash.

Spacey was accused by actor Anthony Rapp of making sexual advances toward him when Rapp was 14.

More than 5,000 people signed a petition calling for the administration to block Yiannopoulos's CSUF appearance, calling it an "alt-right circus."