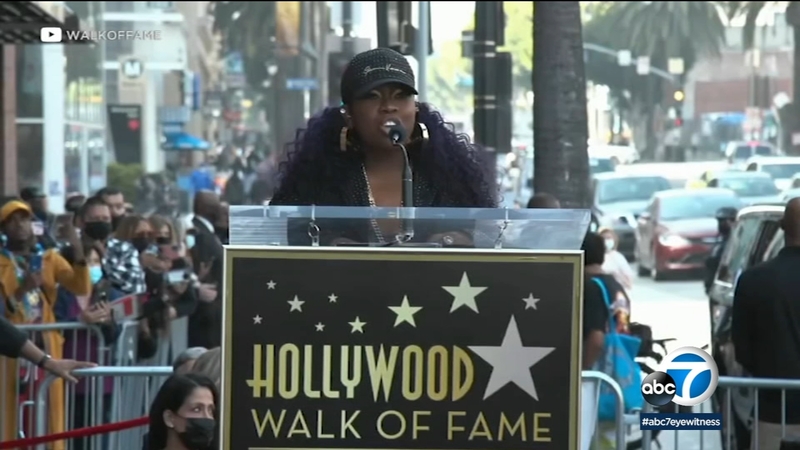 Elliott became emotional at the ceremony, tearing up as she thanked all the people who helped make her career so successful - from her early collaborator Timbaland to her record label to all the pioneering female hip-hop artists who came before her.

"I'd come here 20-some years ago and just used to walk past all of thse stars and just imagine," she said. "It's just a blessing to dream big and it truly happened. I'm truly standing here."

Ciara and Lizzo helped introduce Elliott at the Hollywood Chamber of Commerce ceremony. Elliott's star was placed outside the new location of Amoeba Music on Hollywood Boulevard. Other stars for other music personalities will also be placed outside the store, Ana Martinez, the Walk of Fame's producer told City News Service.

Missy Elliott got emotional as she received her star on the Hollywood Walk of Fame.

Oscar and Emmy-winning actress Regina King left her mark in Hollywood after she placed her handprints and footprints in cement outside of the TCL Chinese Theatre.

Born Melissa Arnette Elliott on July 1, 1971, in Portsmouth, Virginia, Elliott began her career in 1991 when she formed the all-female R&B group Fayze, with her neighborhood friend Timothy Mosley, who would later be known as the rapper and singer Timbaland, serving as the group's producer.

Elliott and Timbaland created an innovative, idiosyncratic sound, heard on a score of hits for the late R&B, pop and hip-hop artist Aaliyah, including "One In A Million,'' "If Only Your Girl Knew'' and "Hot Like Fire,'' along with such chart-topping favorites as R&B vocal trio SWV's "Can We,'' the girl group 702's "Where My Girls At?'' Destiny's Child's "Confessions'' and Whitney Houston's "In My Business.''