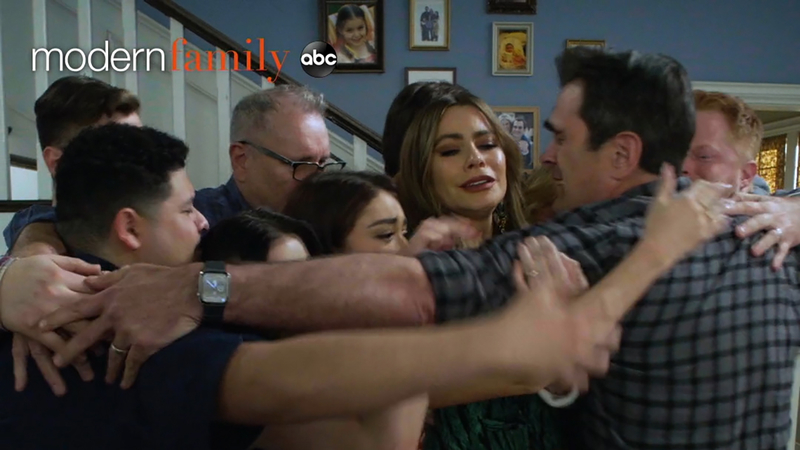 It's time to say goodbye to the Pritchett-Dunphy-Tucker clan.

ABC's "Modern Family," with five record-tying best comedy series Emmys over 11 seasons, airs its hour-long finale at 9 p.m. ET/ 8 p.m. CT Wednesday. The finale will be preceded at 8 p.m. ET/ 7 p.m. CT by the documentary "A Modern Farewell," a look back at the show's creation and run.

Writer-producers Steven Levitan and Christopher Lloyd came up with the idea for the sitcom in 2009, which revolved around an extended family and was done in the "mockumentary" style made popular by "The Office."

"All these things are familiar enough, but different enough that we have a shot with this one," Lloyd recalled thinking as he and Levitan tackled the first "Modern Family" script. "Having said that, I didn't believe in it. I was at a party with one of my 'Frasier' friends, and said, 'I think it's a good piece of writing, but I'd sell the thing to you for 10 bucks because I don't think it's going anywhere.'"

Largely living up to its title, "Modern Family" built its comic storytelling around a mix of characters and couples -- young and older, straight and gay, mostly white but not entirely -- that reflected the change in American households while acknowledging that tolerance and understanding still lagged. The critically lauded series proved to be an increasingly rare TV bird: It gently pushed at social boundaries while remaining a treat that kids and parents could enjoy together.

Over the last 11 years, "Modern Family" fans have watched its cast of kids grow up into adults, "all of legal drinking age," as Jimmy Kimmel pointed out during a "Live From His House" segment Tuesday.

For the cast, a way of life is coming to an end.

"The idea of not coming here every week is unfathomable," said Jesse Tyler Ferguson, who plays Mitchell Pritchett.

"We're sad, obviously, but still kind of in denial, and we're just trying to enjoy every minute of it because we're so lucky," Gould, who plays Luke Dunphy, added.

In this final episode, the family will discover that saying goodbye is much harder than it seems.

"Mitchell and Cam settle in on their new normal, and Phil and Claire decide that one of the kids needs to move out in order to take control of the house again. Meanwhile, as Gloria becomes more successful at work, she notices Jay, Manny and Joe don't seem to need her as much," ABC describes.

After "Modern Family," it's time for some trivia! "Who Wants To Be a Millionaire" returns to ABC, and celebrities are playing for charity.

"A Modern Farewell" airs tonight at 8|7c followed by the "Modern Family" series finale at 9|8c and "Who Wants To Be a Millionaire" at 10|9c.

The Walt Disney Co. is the parent company of ABC and this station.