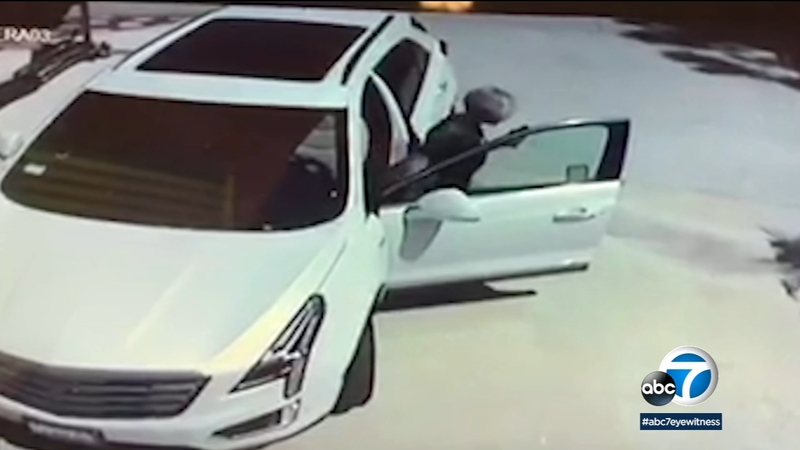 RIVERSIDE, Calif. (KABC) -- A 68-year-old Riverside resident, who chose to remain anonymous, had just returned home from a big-money day at Morongo Casino in Cabazon when she said she was robbed at gunpoint.

"He chased me around the car. He demanded my keys. He demanded my purse. He wanted to know where the keys were to my car so I handed it to him. I told him 'take my car, take whatever you want. Just please leave,'" the victim said.

A 68-year-old Riverside resident had just returned home from a big-money day at Morongo Casino in Cabazon when she said she was robbed at gunpoint.

The woman believes the suspect was watching her at the casino, saw her win, and then followed her home. In addition to taking her money, the suspect also stole her purse, drivers license and credit cards.

"I just wish the casinos would take it more seriously about what's happening there. I went back to the casino and they ran every one of their cameras and didn't see anything that was suspicious," she said.

The Morongo Casino Resort & Spa put out the following statement:

"The safety and security of our guests is always our top priority and we have been in direct communications with police who are investigating this allegation. A thorough internal review of surveillance video showing the guest's movements on the day in question has not revealed any evidence of a suspect or the suspect vehicle. Regardless, we will continue to work with authorities to determine if this matter is related to our location or an unconnected crime of opportunity in the guest's neighborhood. Given the nature of the ongoing investigation, we are referring all other media inquiries to authorities."

The woman says next time she wins, she'll leave with a cashiers check rather than cash. She said she's more aware of her surroundings.

The Riverside Police Department is investigating and told Eyewitness News that Morongo Casino is cooperating. It's unknown whether the woman was followed home or if the suspect was already in her neighborhood, police said.
Report a correction or typo
Related topics:
cabazonriverside countycasinorobbery
Copyright © 2022 KABC Television, LLC. All rights reserved.
TOP STORIES
LA County could hit 'high' COVID level in July, prompt return of masks
Here's what to know about the end of CA's eviction moratorium
California late start law aims to make school less of a yawn
LAX expected to be second busiest US airport over July 4th weekend
Woman searching for brother reported missing in Redondo Beach
Lawyer: Nipsey Hussle lifted up neighborhood he was gunned down in
Apple's newest CarPlay feature will make buying gas easier
Show More
How to save money when buying a new car in an inflated market
Orange County confirms 1st presumptive case of monkeypox
OC woman attacked and sexually battered inside Irvine storage facility
Silver Lake restaurant offers free food in exchange for Sriracha
USC, UCLA moving from Pac-12 to Big Ten in 2024
More TOP STORIES News