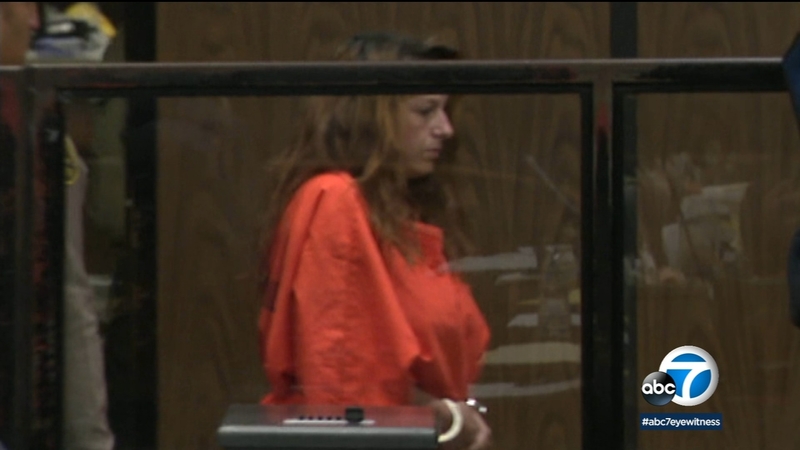 WEST CARSON, Calif. (KABC) -- A Rancho Palos Verdes woman was charged with murder and child neglect in connection to the death of her 2-year-old daughter, who was allegedly left alone in a car with the heat turned up for up to five hours in unincorporated West Carson.

Lacey Mazzarella made her initial court appearance Friday, at the same time her child was being buried. She's accused of drinking alcohol in a nearby car while her daughter, June Love Augosto, was left in the car.

If convicted as charged, the 34-year-old mother faces a possible maximum sentence of 15 years to life in state prison. She entered a not-guilty plea and bail was set at $1.1 million.

According to a report by the Los Angeles County Coroner's Office, Mazzarella told a sheriff's detective that around 11:30 p.m. on Sept. 22, she placed June in her car seat and turned up the heat in the car, which was parked near a residence in the 22400 block of South Vermont Avenue.

A 2-year-old girl died after her mother allegedly left the toddler in a car with the heat turned up for up to 5 hours in unincorporated West Carson. The mother is accused of being in a nearby car, drinking.

At some point after leaving June in the car, Mazzarella fell asleep.

Hours later, around 5 a.m., Mazzarella awoke and went back to her car. Authorities said that's when she found June unresponsive in her car seat. The coroner's report details that June had vomit on her shirt, and skin was coming off the child's back. The toddler's body temperature was 107.5 degrees, the report says.

Mazzarella then took the child out of the car seat, placed her on a patch of grass and sprayed her with a water hose in an attempt to cool her down, the report stated. Mazzarella then took her daughter into the house on South Vermont Avenue, where a 911 call was placed. The child was later pronounced dead shortly after 6 a.m. at a local hospital.

June's father, Garry Agosto, told authorities that Mazzarella has a 9-year-old child who she lost custody of as a toddler due to neglect, in her home state of Connecticut. That child was eventually adopted by a relative, he said. Media reports from Connecticut indicate she was convicted of drug charges, and authorities found that other child on a bed where powdered cocaine was also found.

The Los Angeles coroner's report also indicates Mazzarella was known to social workers who were concerned about her daughter's welfare. She was involved in a car crash in June and suspected of DUI. Her daughter was taken away at that time, but later returned.