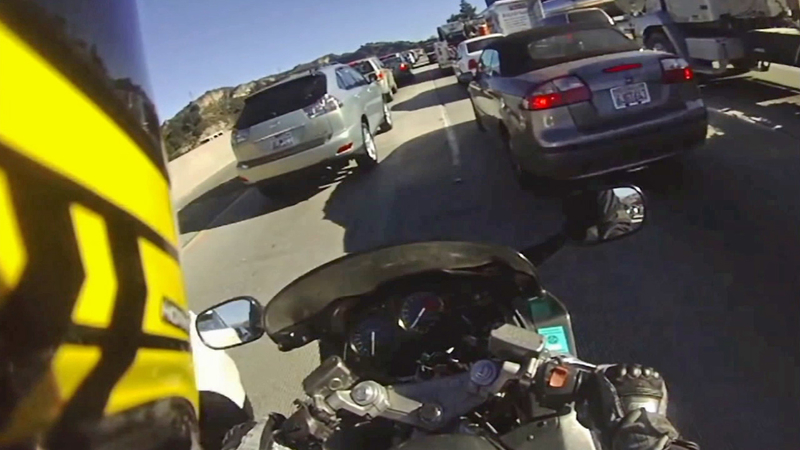 SANTA ANA, Calif. (KABC) -- A new study out of UC Berkeley finds the practice of lane splitting poses no additional danger to motorcyclists.

California law allows for the maneuver, which is the act of a motorcyclist passing stalled traffic by going in between lanes.

The study was released by UC Berkeley and was commissioned by the California Highway Patrol and the Office of Traffic Safety. It found lane splitting is no more dangerous than just riding a motorcycle.

"It gives them more time to slow down and react and hopefully avoid a collision or avoid someone else lane changing in front of them, when they wouldn't see them normally because they're going too fast," said Sgt. Todd Kovaletz with the California Highway Patrol.

The exception comes when lane splitting is done at speeds over 10 miles an hour in excess of the speed limit.

Some local drivers disagree with the study's findings.

"They're always speeding and weaving in and out of traffic. Definitely it is dangerous," said John Gonzalez of Anaheim.

Gonzalez's brother died in a motorcycle crash. That's part of the reason he's so wary of bikes on the road, especially when bikes lane-split.

Devin Strange rides and sells motorcycles. He says lane splitting is actually safer for riders than sitting in traffic.

"A: you're not rear-ended by a car coming from behind you, and B: It alleviates a little bit more congestion as you get a chance to get to the front of the line," said Strange.

No matter the opinion, the CHP says a little courtesy on the road goes a long way.

"Be conscious of what it's like for the other drivers and other riders, and everyone can get where they're going safer," said Kovaletz.

It is important to note: California is the only state where lane splitting is not banned.