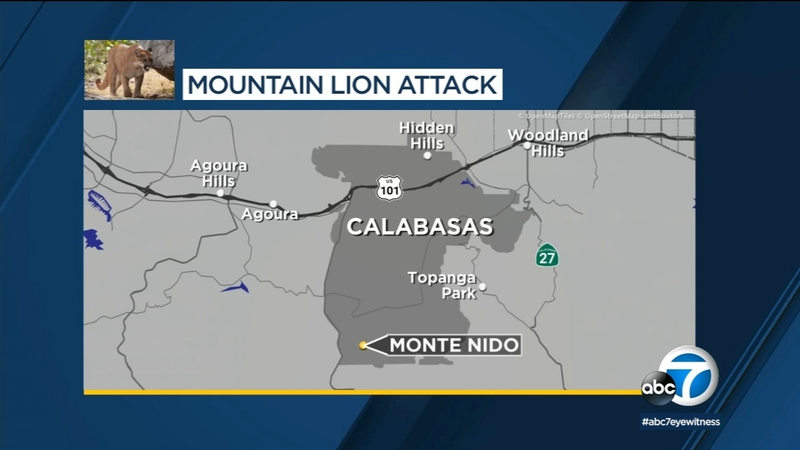 CALABASAS, Calif. (KABC) -- A mountain lion that attacked a 5-year-old boy in the Calabasas area was shot and killed earlier this week by a wildlife officer, the California Department of Fish and Wildlife said Saturday.

The 65-pound mountain lion attacked the boy in his front yard in Monte Nido at about 10:45 a.m. Thursday, inflicting wounds to the child's head, neck and upper torso before the boy's mother was able to fend off the attack by striking the lion multiple times.

The boy was rushed to a hospital and was expected to recover.

Department of Fish and Wildlife's law enforcement division launched an investigation of the incident, interviewing the family at the hospital and responding to the scene of the attack, where an officer discovered the "aggressive" animal crouched in a corner of the family's yard.

"Due to its behavior and proximity to the attack, the warden believed it was likely the attacking lion,'' the agency said in a statement, adding that the animal was shot and killed on site.

DNA samples taken from the killed mountain lion - including human tissue and blood from underneath its claws - later confirmed that it was the creature that attacked the boy.

Another mountain lion spotted in the area was tranquilized and tested to ensure it was not involved in the attack. DNA tests confirmed that fact so it was released back into the wild unharmed, CDFW officials said.

A third mountain lion was also spotted in the area at the time. That was a collared female who is tracked as part of a federal mountain-lion study and is not known to have had any conflicts with humans. She gave birth to cubs in October 2020. She was not captured and the tracking collar indicates she later left the area.