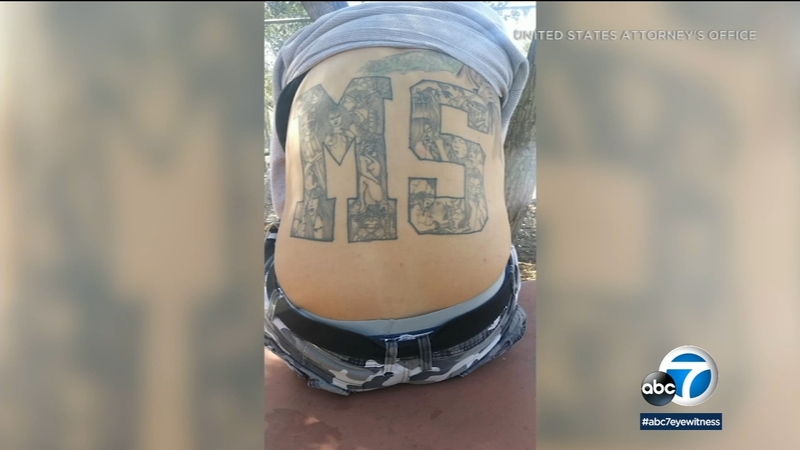 LOS ANGELES (KABC) -- Federal and local authorities on Tuesday announced a racketeering indictment against 22 alleged members of the notorious MS-13 gang, 16 of whom are accused in the murders of seven people in areas across Southern California over the past two years.

Prosecutors described the series of killings as "grisly," including the dismembering of one gang rival who was kidnapped and taken to a remote location in the Angeles National Forest.

"Six defendants hacked him to death with a machete," said Nick Hanna, U.S. Attorney for the Central District of California, at a morning news conference. "The victim was dismembered and one of the defendants allegedly carved out his heart before throwing the body parts into a canyon."

Southland and federal law enforcement officials held a news conference to announced the indictment of alleged MS-13 members accused in a series of murders.

The 12-count indictment unsealed Monday contends that alleged leaders of the gang authorized and coordinated the murders, which were said to have been carried out by those named in the document.

"We have now taken off the streets nearly two dozen people associated with the most violent arm of MS-13 in Los Angeles, where the gang is believed to have killed 24 people over the past two years," Hanna said, referring to the subset of the gang known as the Fulton clique, which operates in the San Fernando Valley.

According to prosecutors, MS-13 members suspected the victims of cooperating with law enforcement investigators. In one case, the defendants are accused of targeting a homeless man who was living in a park controlled by the gang.

The case is the result of an investigation by the L.A. Metropolitan Task Force on Violent Gangs, which is comprised of FBI special agents, Los Angeles police officers and Los Angeles County sheriff's deputies.

MS-13, or La Mara Salvatrucha, was formed in Los Angeles in the 1980s by refugees from El Salvador and is linked to many slayings in certain parts of the U.S. In California, the gang has clashed with rival Nortenos gang members.

President Donald Trump has singled out the MS-13 gang as a threat to the U.S. and blames weak border enforcement for the group's crimes. But many gang members were born in the U.S.