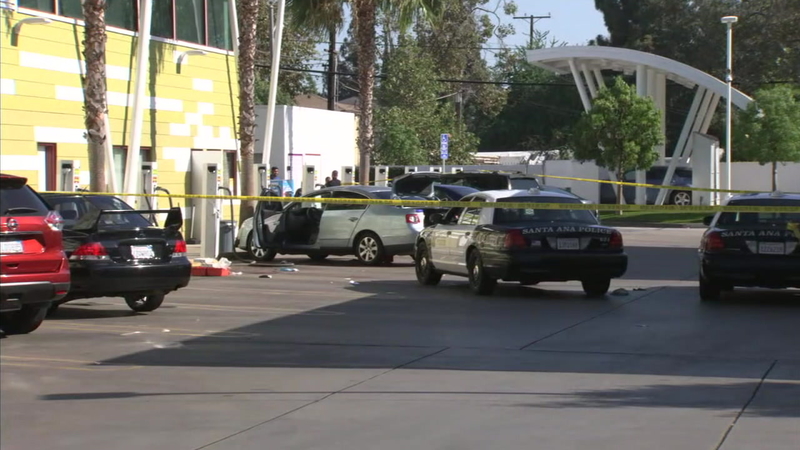 SANTA ANA, Calif. (KABC) -- A homicide suspect was killed and another is in custody following an officer-involved shooting in Santa Ana Thursday, police said.

Police said the man who died had been named as a suspect in an Aug. 14 homicide and a warrant had been issued for his arrest.

At about 3:15 p.m., officers from a gang unit were looking for a gray-green Volkswagen Passat that was connected to the earlier homicide. They found it at the Santa Ana Express Car Wash, located at 202 E. First Street, with two suspects inside.

"I saw him get dragged out of his car because he couldn't like move," witness Elizabeth Serrano said. "I think I saw them do CPR on him before they left."

Santa Ana police said one man was shot by police gunfire and taken to a nearby hospital, where he died. The other person in the vehicle, who was not struck, was taken into custody. That person has not been described as a suspect in the homicide investigation.

Witnesses said they heard shots from this #SantaAna Express Car Wash. You can see the police tape and what looks to be the car possibly involved. @ABC7 pic.twitter.com/lPyxRyoaf2

Serrano was vacuuming her vehicle when the shooting happened. She said she ducked for cover and heard about three gunshots.

"I turned around like after the gunshots and I just saw the guy sitting there and everyone was around him. It was just really scary," Serrano said.

No officers were injured in the incident, authorities said.

The victim in the Aug. 14 homicide was Hugo Sanchez Jr. The 34-year-old was pumping gas when he got into a confrontation with three suspects at a gas station. The suspects then forced him into his vehicle and made him drive two blocks down the street.

When he tried to run out of his own truck, he was shot in the back. The suspects then fled in the suspect vehicle.

Authorities said another person who was not at the officer-involved shooting was also arrested in connection to the homicide.