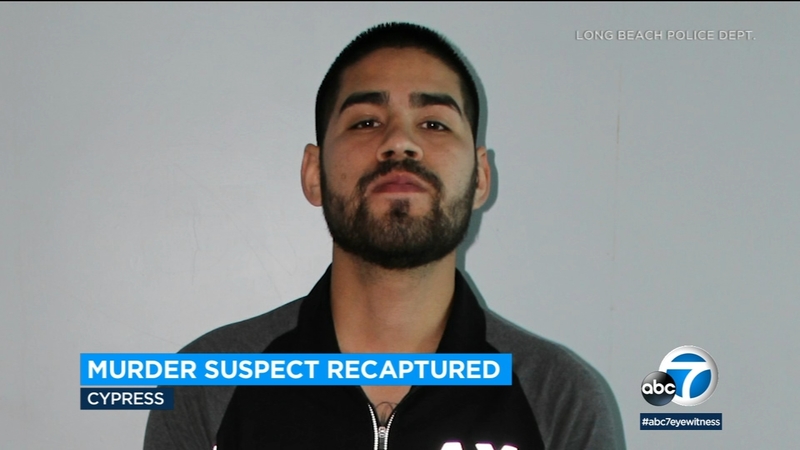 LOS ANGELES (KABC) -- A murder suspect mistakenly set free from jail in downtown Los Angeles has been recaptured after a weeks-long manhunt, according to authorities.

Steven Manzo was spotted in the city of Buena Park in Orange County, getting into a grey Nissan Sentra with several other people inside, and investigators followed the car to the nearby city of Cypress where Manzo was arrested Monday, according to a statement from the Los Angeles County Sheriff's Department.

Manzo, 24, was taken into custody after a traffic stop at Lincoln Avenue and Watson Street around 1:25 p.m., according to Cypress police. Authorities released video of the moment he was recaptured.

The suspect is now in the custody of Long Beach police, and is being held on more than $4 million bail.

Manzo is one of three men charged with fatally shooting another man in Long Beach in 2018. Manzo was arrested a year ago and had been incarcerated since then. He was inadvertently released from custody before the trial even started.

Several agencies have denied blame for his release.

In a statement released the day after Manzo was released, the L.A. County Sheriff's Department said it "did NOT erroneously release a murder suspect yesterday from our custody."

"LASD received an 'Order For Release' from the court, indicating the case was dismissed. As such, the department complied with the court order and processed the individual for release," according to the statement. "Should you have any further questions about this incident or the circumstances surrounding it, please contact Long Beach Police Department or the District Attorney's Office."
The case against Manzo was dismissed on March 8 and the same five charges were immediately refiled under a different case number after Manzo was not transported from jail to court, where a hearing had been set to determine whether there was enough evidence to allow the case against him to proceed to trial, according to Ricardo Santiago of the District Attorney's Office.

Manzo was ordered remanded pending arraignment on the new case March 23, and the prosecutor handling the case alerted law enforcement March 9 after becoming aware that the defendant had been released from custody, according to Santiago.


Long Beach police is the lead agency in the case.