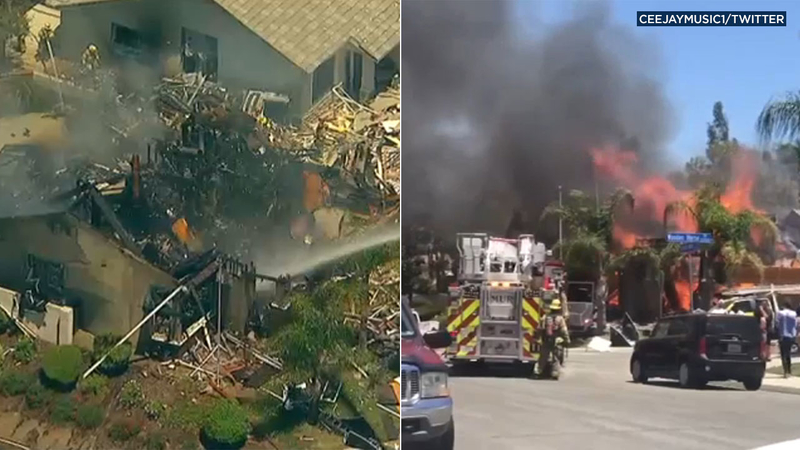 MURRIETA, Calif. (KABC) -- The gas company worker killed in an explosion that leveled a home in Murrieta has been identified as a 31-year-old lead construction technician.

Wade Kilpatrick, 31, was with Southern California Gas Company for 11 years. He leaves behind his mother, six brothers and a sister, the company said in a statement.

A Murrieta woman is sharing her harrowing experience of when she narrowly escaped her home during an explosion that killed a gas company worker.

"He started in 2008 as a meter reader. He leaves behind his mother, 6 brothers and a sister. One of his brothers is also an employee at the company," the statement said in part.

The worker's mother posted to Facebook saying in part, "My heart hurts so much. Yesterday Wade was taken from us... Please keep Wade in your thoughts."

A preliminary investigation revealed the explosion was connected to a gas leak that workers were attempting to repair on the property after a private solar contractor damaged the gas line, according to SoCalGas. One contractor did not call 811 to determine if any utility lines were nearby, the gas company says.

Among those injured, three were firefighters and the other 12 were civilians, fire department officials said. The firefighters were treated at an area hospital and later released. In a press conference Tuesday morning, officials did not provide an update on the conditions of the 12 others injured. Neighbors said the home was recently sold, and the new owners were doing some renovations. The homeowner was able to crawl out of a window, and her family was already outside.

SoCalGas said the slain employee was killed in the explosion and another was transported to the hospital and later released.

"Obviously, it is an incredible loss for our company. We are a strong family, and this - as you said - obviously takes a big toll on the company and we will continue to process through this," SoCalGas spokesperson Randon Lane said.

Authorities were first called to the home in the 23500 block of Wooden Horse Trail just before 11 a.m. Monday for a report of a gas line rupture. Firefighters responded and SoCalGas was on the scene by 11:23 a.m., fire officials said.

"It shook the house. The windows sounded like they were going to break. The walls shook," resident Rebecca Byrd said. "I mean, everybody was terrified."

Additional firefighting units and paramedics were called as the house burst into flames and heavy smoke poured into the sky.

"It really just seemed like a war zone, the roofing was everywhere, glass was everywhere," one woman said. "People were running around, a couple of the workers who were bloodied were still trying to walk and we had to get them to sit."

Lane said 811 was not called before repairs began on the gas leak near the front right corner of the house. State law requires both workers and homeowners to call 811 before any excavation work to determine if utility lines are nearby.

"811-DIG is a free service that is provided both to residents, to businesses, to contractors, and we encourage everyone to call 811," Lane said. "As we saw yesterday, not calling 811-DIG can create devastating affects on individuals, for companies. So that is something that we just always encourage, and it's something that's required by law."

Residents of neighboring homes were evacuated, and officials are still unsure when they will be allowed to return to their homes. An evacuation center was established at Vista Murrieta High School at 29251 Clinton Keith Road, where about 20 residents checked in to the care facility, and six people were housed overnight, according to Murrieta Deputy Fire Chief David Lantzer.

Lantzer added four nearby homes are uninhabitable at this time due to damage, and one home was moderately damaged. Several other homes sustained broken glass and were without power, and Lantzer said it is not yet clear if they can be occupied.