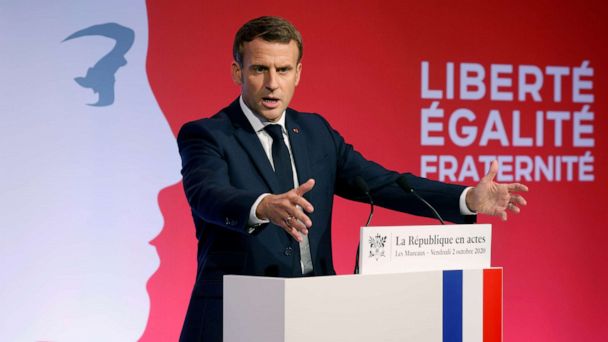 PARIS -- Several Arab countries are condemning French President Emmanuel Macron after he said he would propose legislation to tackle Islamist separatism and paid tribute to history teacher Samuel Paty, who was murdered after showing caricatures of the Prophet Muhammad in class. Macron has previously called Islam a "religion in crisis."

Thousands of protesters took to the streets in Bangladesh and the Gaza Strip this week after Macron's comments led to social media channels to be flooded with the hashtags #BoycottFrenchProducts and #NeverTheProphet.


Turkish PresidentRecep Tayyip Erdoanpublicly called for the boycott of French products on Tuesday, decrying "rising Islamophobia in Europe." Some shops have already removed dozens of French brands from their shelves. French Foreign Minister Jean-Yves Le Drian said Monday the French ambassador to Turkey would be called back to Paris for consultation amid rising diplomatic tensions.

Leaders and officials in Iran,Pakistan and Qatar have also come out to denounce Macron's support of the Prophet Muhammad cartoons, which many Muslims find disrespectful. Pakistan's prime minister, Imran Khan, even called on Facebook to place a ban on Islamophobia and hate speech against Islam "given the rampant abuse and vilification of Muslims on social media platforms."

The Qatari State has condemned an escalation of "populist rhetoric inciting the abuse of religions."

Iranian Foreign Minister Zarif said insulting 1.9 billion Muslims for "the abhorrent crimes of such extremists is an opportunistic abuse of freedom of speech."

The Oct. 16 killing of Paty has led to protests across France. The French Council for the Muslim Faith denounced the history teacher's murder as "a betrayal of the message of the prophet" but said "forcing [the cartoons] on everyone by projecting them on public buildings or showing them to children in a compulsory education setting is another thing."


On Sunday, Macron pleaded for unity.

"We are united," he tweeted, adding, "We will not give in, ever" in both English and Arabic.

Debate around Islam is raging as the French government seeks to implement strong measures against radical Islamism.