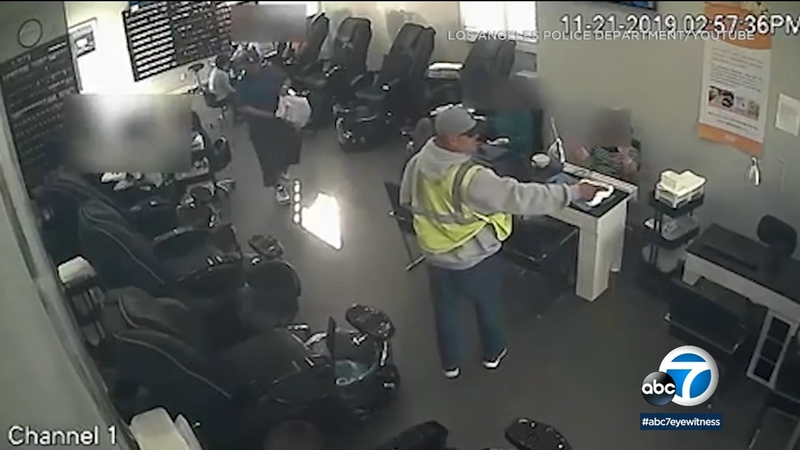 LOS ANGELES (KABC) -- The last thing you expect to happen when getting a manicure and pedicure is to be robbed at gunpoint.

But two suspects are doing just that. They've hit at least eight salons so far, including Nail Station in Silver Lake.

"That's insane because you're in such a vulnerable position. You're getting nails done, sitting in a seat, can't really do anything to defend yourself. I don't know what i would do," said Chelsea Frank, a customer at the nail salon that was robbed.

Surveillance video released by the Los Angeles Police Department shows the brazen bandits in action on Nov. 21, 2019 around 3 p.m. The two suspects go from customer to customer while they're sitting in the salon chairs and collect personal belongings including cellphones and wallets.

Chelsea Frank has been going to Nail Station for 6 years.

"They're the nicest people, they work really, really hard. I can't imagine how scary that must be for everybody. It's a lot of women. That's a very scary situation to be in and I would never imagine in a million years getting my stuff stolen at a nail salon," said Frank.

Since the November robbery at Nail Station, the same suspects are responsible for five other salon robberies in Silver Lake and Highland Park. They are also responsible for robberies at salons in Alhambra and Pasadena.

"I can commend the people who were in the businesses. They did not panic, they did not try and resist, they did not fight. At the end of the day, it's just property. If you're confronted where somebody tries to take your property, just give it to them. Be a good witness and contact the police," said LAPD Officer Tony Im.