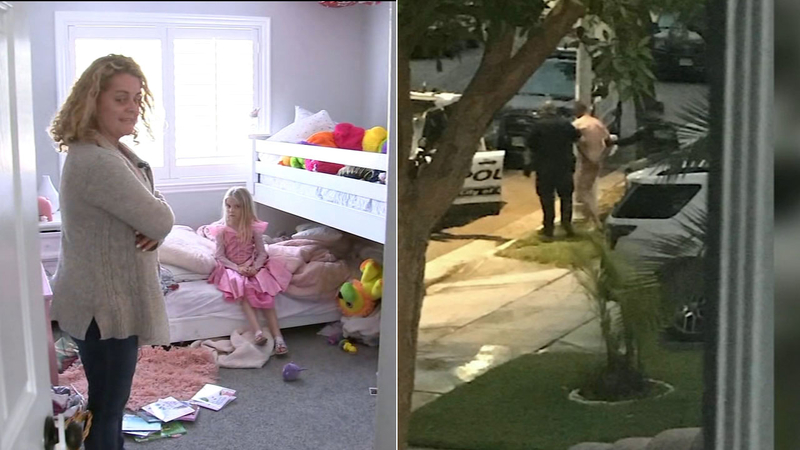 CORONA, Calif. (KABC) -- A naked man allegedly under the influence of drugs broke into a Corona home, grabbed a hammer and terrorized a woman and her twin daughters, officials say.

Rachel Bollin recounted the terrifying ordeal that she went through with her 7-year-old twin daughters early Saturday morning.

"I screamed back, get the hell out of my house. He said no, I'm not going to," Bollin recalled.

She grabbed her cellphone and ran into her daughters' bedroom, locking the door as she heard the intruder coming up the stairs.

She later learned he had stripped off all his clothes and grabbed a hammer from a toolbox in the garage.

She called 911 and he began banging on the door.

Then as she tried to comfort her frightened daughters, the man moved into her own bedroom and began smashing walls and causing other damage.

"I thought he was gonna kill me and my kids," she said. "There is no denying that that was his goal."

Minutes later, police arrived and arrested the naked suspect. He had apparently taken his clothes off in the home's garage and grabbed a hammer from her husband's toolbox.

Police say 43-year-old Jason Nelson, who lives in the neighborhood, was under the influence of drugs when he broke into the home. He told officers he came into the house looking for a place to hide.

He was booked for burglary and being under the influence.