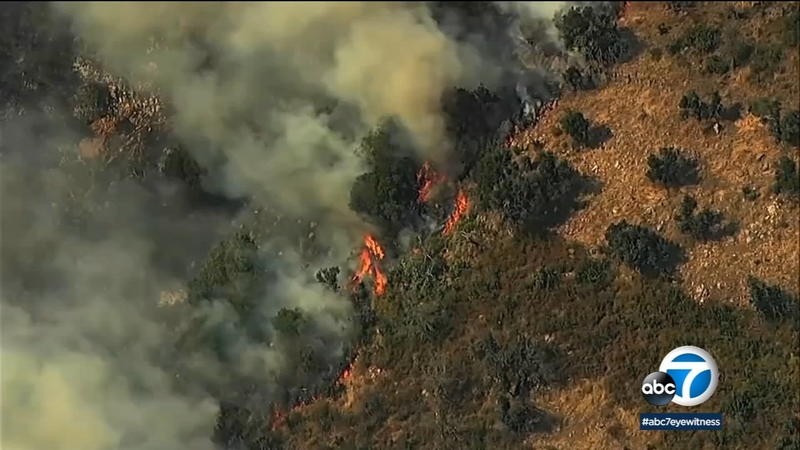 The fire currently stands at 570 acres with 5% containment, according to CAL FIRE. Officials say crews will work through the night to contain and control it.

"Topography's not in our favor since we're dealing with sloped areas, and it's been a challenge to get to some of these remote areas," said CAL FIRE spokesperson Erick Hernandez.

Fire officials say the cause of the fire is currently under investigation.

Jacob Schwarz lives in the area and believes he saw the fire begin. He said he was sitting outside as the wind began to pick up.

"We heard a pop and then a spark just fly out of it looks like a telephone box or a power box," Schwarz said.

Schwarz says a few moments later, he noticed flames spreading from that location.

But this isn't the first fire to burn in this area. Both firefighters and residents alike say it's in the same spot as the Atlas Fire back in 2017. That fire, which was a part of the Northern California firestorm, burned tens of thousands of acres and lasted for weeks.

An experience, says nearby resident Tom Bird, that prompted him and his neighbors to take extra steps to help reduce the threat of future wildfires.

"Everyone that I know around here, since the '17 fire, has been working pretty hard to clean up vegetation, clean up brush, but some events you just can't predict," Bird said.

But even as this fire continues to burn just feet from Bird's house, he says he's not worried. Instead, placing his trust, in the people fighting it head on.

"We know the hard working men and women at CAL FIRE will keep these fires under control," he said.

Evacuations are ordered to all of Soda Canyon Road, CAL FIRE said. Silverado Trail is closed to the public.

An evacuation center has been set up at Crosswalk Community Church in Napa, at 2590 First Street.

Napa County officials say evacuees in need of food, water, or charging stations are welcome to utilize the Napa County evacuation center. Accommodations for overnight shelter may be announced if needed.

Napa Community Animal Response Team has activated their hotline for requesting services. You can call (707) 732-1555 for request with animal services. A livestock shelter has been set up at 1132 El Centro Avenue at the Valley Brook Equestrian Center.

There are currently no threats to the city of Napa, according to fire officials. They are asking the public to avoid the area.